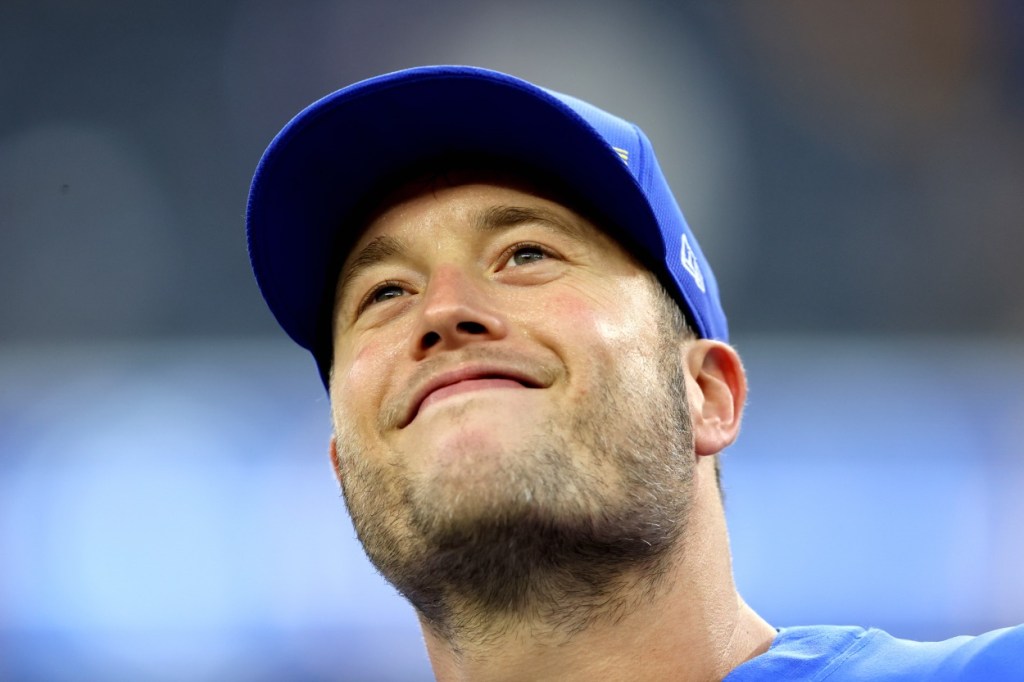 I’m a born-and-raised Tampa Bay Buccaneers fan but I’ve found myself rooting for Matthew Stafford’s success for most of the season. I was a Stafford fan right up until he ran up the first-half score on my Bucs in the playoffs. After a winless career in the playoffs with the Detroit Lions (0-3) he’s finally getting his shot at a Super Bowl in his first season with the Rams.

It’s bittersweet for Detroit Lions fans to praise Matthew Stafford for 12 seasons as one of the league’s best but a player stuck on a mediocre team only to see him to the stacked Rams and go 3-0 in the playoffs. There are plenty of Lions fans who are salty about Stafford leaving but a LOT more Detroit fans are rooting for him to succeed. But what about Matthew Stafford himself, how does he feel about this success after a career in Detroit?

During a press conference on Monday, Matthew Stafford praised the city of Detroit and its fans. He went so far that he almost said this Super Bowl is for Lions fans too but stopped just short. It’s clear that. his heart is still in the Motor City and always will be.

Matthew Stafford Praises The Detroit Lions And Its Fans

“And then as far as what Detroit fans are, I mean, they were extremely loyal, they were great, they were passionate — all the things you want fans to be. Unbelievable to me and my wife and my family and the community, how many times we were out to eat or playing with our kids in the park, whatever it was, and the support that we felt from them not only when the times were good. But when my wife was going through some of the things that she was going through health-wise, or maybe we weren’t winning football games, they were always supportive. And people cared about not only the Lions and me, but my family and us as people. So, always gonna have a soft spot for Detroit in my heart and just appreciate it.”

Stafford then dug deeper and talked about how he’s a product of his environment, as we all are, and without his time in Detroit he wouldn’t be where he is today.

“If we sit here and say we’re not a product of our experiences, or we haven’t learned from some of the things that we’ve had go on in the past, picked up things from great teammates or coaches along the way, we’d be lying to ourselves. I do appreciate so much just everybody’s support. And I know that when I’m out there playing, whether it’s this week in the Super Bowl or any other game, I’m a representation of those experiences that I’ve had with those people. I feel like every time I step out there on the field, I’m playing for not really myself, but for everybody that’s helped get me there.”

This dude is out here saying he’s not playing for himself but everyone that’s helped him. So I guess he didn’t really stop short of saying this one is for Detroit Lions fans he just didn’t specifically call them out in that portion of his statement.

The vast majority of Detroit Lions fans I’ve encountered support Matthew Stafford but it’s still bittersweet for them to see him succeed while the Lions continue to break their hearts. So let’s see how they’re reacting to Stafford’s comments, shall we?

Always says the right things. Class act all the way. Wish him nothing but the best. LA can thank Matt Patricia for #9 because was the most god awful, doucheist head coach ever to walk the sidelines.

… and THIS is why we root for him. #ClassAct

Don’t play for the owners but play for us long suffering Lions fans!!

So the real Lions championship was the friends we made along the way?

I don’t know why I felt the need to include this final tweet about Matthew Stafford’s Monday press conference. This one just seems like the cherry on top. Two Detroit legends staying in contact while one of them is on the precipice of history…

Matthew Stafford said he has heard from Calvin Johnson, and brought up how much he loved learning from Calvin in Detroit.

Now that we’ve come this far, who’s everyone rooting for? Can the LA Rams stop Joe Burrow’s magic? Will Matthew Stafford win his first Super Bowl? Hit me up on Twitter (@casspa) with your predictions.