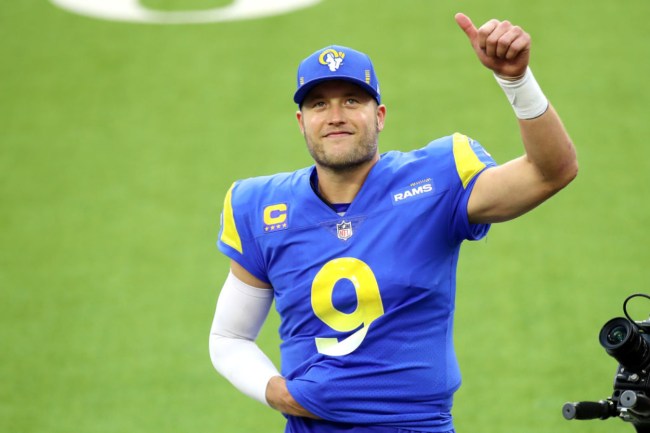 The Rams’ Week 10 loss to the 49ers wasn’t just a bad night for Matthew Stafford, it was also a pretty tough night for his wife Kelly as well.

The Rams’ QB had a poor outing against San Francisco while Kelly got caught up in ‘pretzelgate’ after throwing a piece of a soft pretzel at a 49ers fan for heckling her.

While there wasn’t any video footage of Kelly throwing a piece of a pretzel at a fan, she took full responsibility for her “weak moment” when a fan hopped into her Instagram mentions calling her out about it.

While we’re over a week removed since ‘pretzelgate’ took place, we’re just now hearing about what Matthew’s reaction was to the pretzel toss, and it’s fantastic.

During Tuesday’s installment of her podcast ‘The Morning After with Kelly Stafford,” Kelly shared what Matthew’s initial reaction was to her pretzel toss.

“He said, ‘Well, I wish I was as accurate as you were, but I guess only one person in the family was accurate that night,’” Kelly explained.

Stafford most certainly wasn’t his accurate self against the 49ers completing just 26 of his 41 passes and throwing interceptions on back-to-back drives in the opening quarter.

Kelly also explained that her husband said “maybe if I wasn’t playing so sh-tty then the guy wouldn’t be able to say as much to you.”

Mrs. Stafford said that the particular fan “would have said anything all night.”

Kelly explained that she’s hitting pause on traveling to Rams away games for a little while.