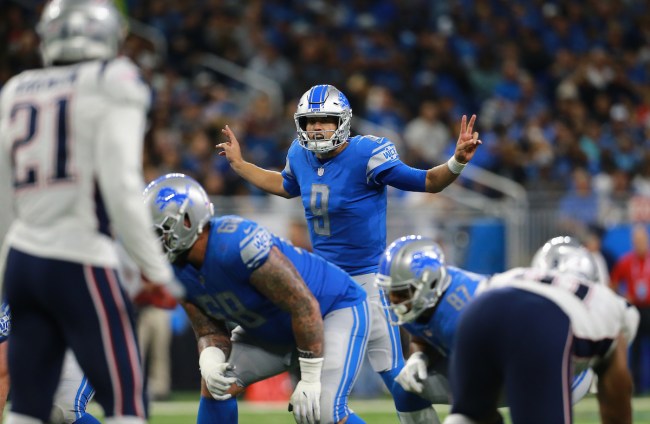 The Matthew Stafford-Jared Goff trade absolutely shocked the sports world, with the former No. 1 overall picks being swapped for one another before the NFL offseason even gets underway. While both quarterbacks have a chance to redefine themselves with new franchises, and are saying the right things following the deal, only time will tell whether the Rams or Lions got the better end of the deal.

Prior to the big-time trade, though, Matthew Stafford reportedly asked the Lions to trade him anywhere but the New England Patriots. Not sure what the quarterback has against Bill Belichick and the Pats — who have won six Super Bowls in the past 20 years — but he didn’t want anything to do with the franchise. After being shipped off to L.A., that’s the end of the story, right?

That’s because former Patriots linebacker Tedi Bruschi has some fighting words for Stafford, telling Ordway, Merloni & Fauria on WEEI on Wednesday that the signal-caller doesn’t have the toughness to play in New England. No, really, Bruschi really said that.

“He’s not tough enough to play here!” — @TedyBruschi on report that Matthew Stafford wanted to be traded anywhere but the #Patriots.

“He’s not tough enough to play here. He’s just not tough enough. I don’t think he’s tough enough to be coached hard. I mean, do you realize the mental toughness that Tom Brady had to have for 20 years to deal with Bill Belichick and that type of coaching? I mean, constant pressure every single day. Does Stafford sort of grab you as a guy who could handle that? I just don’t think so. So he went Sean McVay and get his little best friend relationship and have fun over there. That’s fine.”

Like, damn, that’s a serious diss from Bruschi, who even brought up the reported Matthew Stafford-Sean McVay dinner in Mexico that went down after the Goff trade was finalized. Stafford doesn’t rub me as the confrontational type, but, sheesh, I wonder if he’ll stand up for himself against the former linebacker’s claim.

Then again, maybe Stafford just tweets out that epic video of himself navigating a game-winning drive a couple years ago where he separated his shoulder on a touchdown pass. Not tough enough, Tedi? Well… the tape doesn’t lie.

The embodiment of leaving everything on the field.

Matthew Stafford had one of the greatest mic’d up moments ever…
✊
pic.twitter.com/FKLrNZ4lRH

In the end, Matthew Stafford got his wish and he’s on a team that can compete for Super Bowls with him on it, while avoiding the wrath of Belichick and the “Patriot Way”. I’ve got no idea why he wanted to avoid such a successful franchise, but, hey, if he wins big with the Rams, he can get the last laugh over haters like Tedi Bruschi.