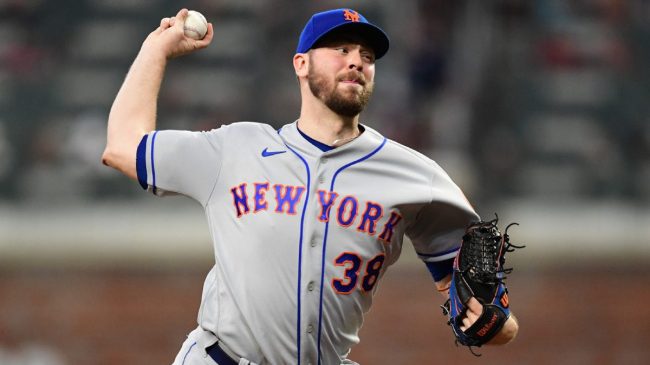 The New York Mets’ starting rotation is under construction at the moment.

The original one-two punch of Jacob deGrom and Max Scherzer will be on the sidelines for the start of Major League play as they each nurse unexpected injuries. Scherzer should return to the rotation soon, but deGrom may be out for significant time.

With their two stars out of commission for the Opening Day ceremonies, the Mets have been forced to go in a different direction.

On Wednesday, the team announced their plan to pitch Tylor Megill for game number one.

Buck announces Tylor Megill will be our #OpeningDay starter. 💪 pic.twitter.com/75f7UmS2Jk

While talented, the youngster has only pitched one professional season. In 2021, Megill recorded a 4-6 record over 18 appearances while striking out 99 batters.

Megill is certainly an imposing figure on the mound.

At 6-foot-7, the righty averaged nearly 10 strikeouts per nine innings of work last year. His fastball tops out around 95 MPH. Still, he’s nowhere near the level of deGrom or Scherzer.

That duo possesses electric stuff, and the trophy case to prove it. Together, they’ve combined for five Cy Young awards over the last 10 seasons.

Megill, meanwhile, has less than a full stint under his belt.

Mets fans were obviously disappointed with the end result, and they let it be known on social media.

Looking forward to the 2023 season. That’s when it all comes together! https://t.co/aTrw2MuOnV

Joins the likes of Mike Pelfrey, Jon Niese, Dillon Gee and Bartolo Colin to get an Opening Day start for the Mets over the last decade plus https://t.co/niYQ1sKPlO

Hot start! At least the lineup is the best it's been by far in over a decade. https://t.co/1c0tsJoeL5

Hahaha all u can do us laugh at this point https://t.co/kTpCKVALvE

The team that signed Max Scherzer and is paying him >$43 Million and also has Jacob DeGrom making $36 Million on its payroll, is using an Opening Day starter who has 4 career wins. #Mets https://t.co/GnG9AeidWe pic.twitter.com/RGimdxCQPI

1. Megill is in the starting rotation where he belongs.
2. Megill is the Opening Day starter. Oh my Lord. https://t.co/60COCsYmTb

this franchise is cursed man https://t.co/nbxpHwSlxt

The Mets will take on the Washington Nationals on Thursday. We’ll see if Megill can prove the doubters wrong and land an Opening Day win.