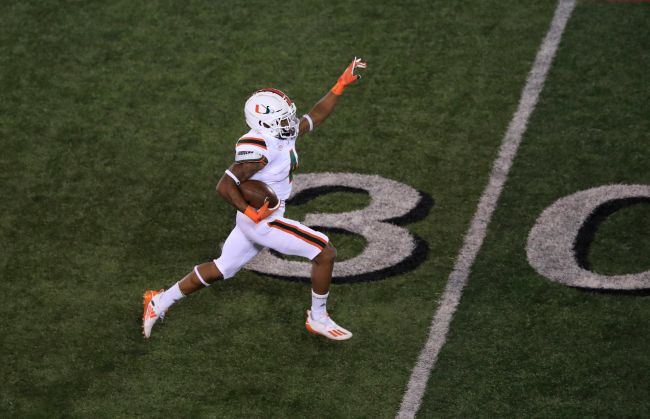 Miami football is no stranger to flashy names and high-profile recruits. The “U” is a powerhouse program that consistently finds itself in the conversation for the top high school players across the United States and offered scholarships to a trio of notable sons on Wednesday.

Head coach Manny Diaz and his staff extended the chance to play for the Hurricanes to the offspring of NFL Hall of Famers Edgerrin James and Jason Taylor, as well as that of Polk County and Florida rapper Rick Ross. Eden James and Mason Taylor are class of 2022 recruits, while William Roberts III is a part of the 2024 class.

James, like his father, plays at running back and recorded 751 yards and nine touchdowns on 82 carries last season. It was his first year on the varsity level for Treasure Coast High School and the 5-foot-9, 180-pound junior is set to retain sole possession of the backfield next season. He also received an offer from Howard University, an HBCU in Virgina, and East Carolina earlier in the fall.

Edgerrin James retired from the NFL in 2009 after 10 seasons with the Colts, Cardinals and Seahawks. His son is not as big, but he runs with a methodical approach that is very similarly to the 1999 Offensive Rookie of the Year and four-time Pro Bowler.

Taylor is a 6-foot-4, 225-pound tight end for St. Thomas Aquinas and started for a team that won a 7A state title in a seven-game season this fall. He averaged 22.2 yards per catch and played a huge role in the team’s potent run game as a sturdy edge blocker. Much like his father, who also played basketball at Akron, Mason is a multi-sport athlete and excels on the hardwood.

Dolphins great Jason Taylor was a third-round draft pick in 1997 and played 14 years with five different teams, but his first 10 were spent with Miami. He was the NFL’s defensive player of the year in 2006, reached six Pro Bowls, holds the record for most career touchdowns by a defensive lineman and was the runner-up on Dancing With The Stars in 2008. The father-son pair are built similarly with a long, lean frame.

Right next to Taylor at tight end is offensive tackle Roberts III. He is the youngest of the bunch, but he might develop into the best. The 6-foot-2, 270-pound freshman played all nine games in the team’s state championship run in 2020 and received a few starts throughout the year. He has the intangibles to grow into his frame and become an instant contributor at a Power-Five school, earning him offers from Miami and Syracuse.

His father Big Boss (as he was known in high school) earned All-Dade County first team honors in 1993 and attended Albany State University on a football scholarship. Dade County produces some of the best football talent in the nation year-in and year-out, so he was a good player. 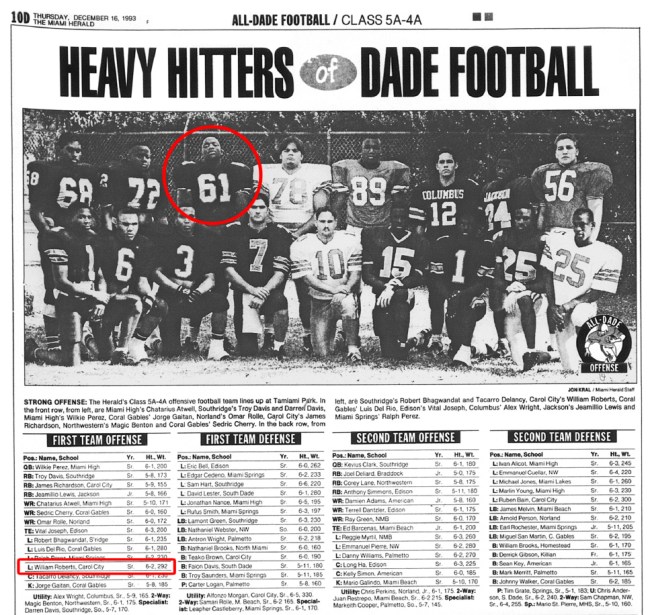 All three recruits will have some time to figure out where they are going to play college ball, but an offer from Miami isn’t a bad place to start. Former Hurricane and Pro Football Hall of Famer Ed Reed is the program’s chief of staff