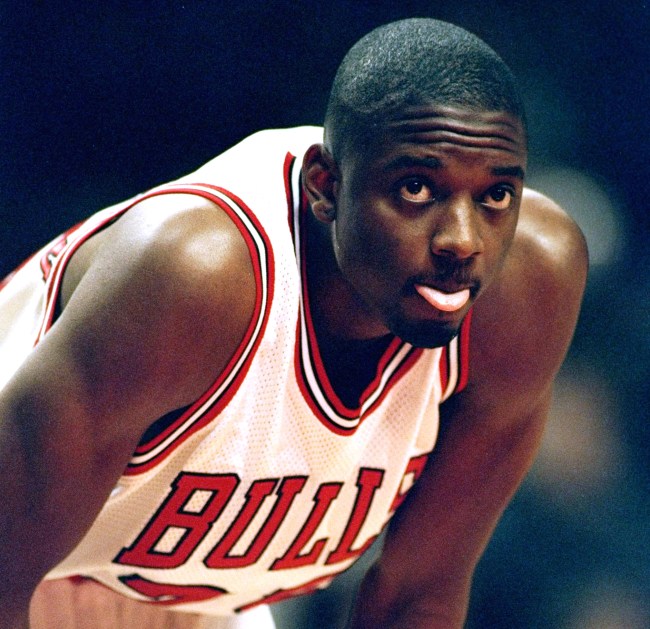 Corey Benjamin, when he was a 20-year-old rookie with the Chicago Bulls, told some of his teammates he could beat Michael Jordan, who was by then retired, in a game of one-on-one.

That was a mistake.

Following the final episodes of The Last Dance, HoopsHype sat down with several former Bulls players: Dickey Simpkins, Jud Buechler, Scott Burrell, Rusty LaRue, Kornel David, and Corey Benjamin, as well as three writers who covered the team: John Jackson, Sam Smith, and Kent McDill, to share their memories of that time period in Chicago and in the NBA.

During the lengthy and fascinating discussion, Corey Benjamin talked about a time right after Jordan’s retirement, he faced the familiar wrath of His Airness for running his mouth a little too much.

“Randy Brown, Ron Harper and Dickey Simpkins were Michael’s close friends,” Benjamin recalled. “Those guys would always talk to Jordan on the phone and Jordan would always have stuff to say. I remember there was one particular moment when MJ said something to me and I told him, ‘I can get that.’ I was saying I could beat him one-on-one. We went back and forth, talking trash with each other for a month or two. Ron gassed it up a lot like, ‘He said he can get you, Mike! He thinks he can beat you!’

“One day, Mike told Ron that he was going to come to our game [in Atlanta] and he told me, ‘I’m about to come see you.’ We’re at the game and they showed Mike walking into the game [on TV] and I knew right where he was headed. I’m in the training room with Ron and Randy, and MJ walks in there. He comes right over to me and says, ‘What did you say?!’ Remember, this is my childhood hero. I man up and I say, ‘I think I can get that.’ He told me, ‘I’ll be at your practice in a few days and we’ll see if you can get that.’

“I was just shaking my head,” Rusty LaRue chimed in. “Everybody thinks they can beat the man until they get a chance to beat the man. Corey was a good guy and a good player. I don’t know if he really thought he could beat Michael or if he just wanted a chance to play against him.”

“We fly back to Chicago and at our next practice, I’m looking over my shoulder but I’m also thinking, ‘Yeah right, he’s not going to fly to Chicago just to play me,’” Benjamin continued.

“After practice, I’m walking off the court when MJ walks into the gym. He said, ‘I’m about to give you your chance.’ As a basketball player, it was the best feeling in the world to play one-on-one against Michael Jordan in front of everybody. The score was 11-9, just to let you know. Everybody says it was 11-0 or 11-1 or 11-2. He did get up to 7-0 pretty fast and I was amazed; I had never seen anything like that in my life. But the final score was 11-9 and it was the best one-on-one game I’ve ever played. It was like a dream come true.”

At this point Kornel David jumped in, “MJ showed up and he just schooled him. Corey was a high-flying athlete who could jump out of the gym; he had incredible athletic abilities. But it’s MJ! There’s a video of it on YouTube! You have to watch it. The next day, the Chicago Tribune ran a double-page [spread] showing all of MJ’s buckets. It was incredible. (laughs)”

“Look around you,” Jordan said at one point, looking at the six championship banners hanging in the gym. “What do you see all around you? You didn’t have anything to do with those!”

After scoring the winning basket, Jordan spanked Benjamin and yelled, “Sit down!” With a smile, Jordan added, “Don’t call me out of retirement again.”

Watch he and Jordan in action below…

As for whether the Bulls would have won a seventh NBA championship if Jordan, Phil, and the rest had returned for one more year?

“Do I wish everybody could have come back again? Yeah, I wish,” he said. “Do I feel like we could’ve won another championship? Yes. I believe we could’ve, especially in a 50-game season. I would’ve loved to have one more year together as a group.”

Benjamin took it a step further, saying, “Yes, we would’ve won it all if those guys returned! It would’ve been a breeze, especially in a shortened season. Even in a regular season, it would’ve been a breeze! They were at the point where nobody could touch them. There was nothing missing from that team. I’m 100 percent sure we would’ve won it all that year, and Vegas will tell you that too.”

Sadly, we will never know.