Michael Jordan Had An Odd ‘Love For The Game’ Clause In First Bulls Contract So He Could Dominate Fools Anytime, Anywhere 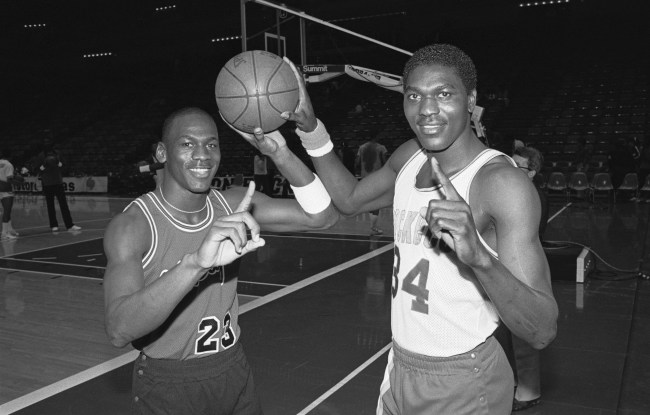 Nobody has ever doubted the ruthless competitiveness of Michael Jordan, as the guy is more than well-known for talking shit to opponents, getting into other players’ heads in unique ways — including his own teammates’ — and always keeping his foot on the gas anytime there’s a challenge in front of him. Hell, MJ even said on The Last Dance documentary that he has a “competition problem,” because he never shies away from going mano a mano against somebody else.

That competitive spirit has lived deep in Michael Jordan for, oh, his entire life, so it’s no surprise that he would exploit it anytime he had the chance to. In fact, Jordan was so passionate about beating somebody else in basketball that, during his first contract with the Chicago Bulls, he actually had verbiage written in for a “love for the game” clause, which allowed him to play hoops anytime and anywhere he wanted to — regardless of risk of injury or any potential profit.

Perhaps the most famous contract clause in the NBA: Michael Jordan’s “For the Love of the Game” clause. The Bulls were never really in a position to negotiate with the greatest player to ever dribble a basketball. Jordan asked for a clause allowing him to play basketball any time, anywhere, because he just loved hooping that much.

The clause is no joke. NBA teams often try to stop players from engaging in physical activity in the off-season. (You may remember Monta Ellis earning a 30-game suspension from who else, the Warriors, after a moped injury in the off-season.) But no one stops Michael Jordan from stepping on a basketball court.

That’s pretty insane, guys, and goes to show just how much Michael Jordan loved the game of basketball — or just dominating fools who dared challenge him in a game of one-on-one.

The odd clause in Jordan’s first deal is also believed to be the only time Jerry Krause (then the Bulls’ general manager), ever gave such a perk in a player’s contract, per Bleacher Report‘s Jesse Dorsey.

Back in the early days of the booming baseball era, Babe Ruth was infamously suspended for barnstorming during the offseason. That is, he toured the country making extra money playing exhibition games in all corners of the nation, and even some outside of it. It makes sense that the league would be angry—the most marketable player in the game was risking injury for a few extra bucks.

However, Michael Jordan had a clause in his contract that he was allowed to play basketball whenever he wanted to. Jordan could play in exhibition games, scrimmages, or just a pickup game in a random park whenever he wanted—the only player that general manager Jerry Krause ever thought about giving this clause to.

It’s kind of absurd to think that the greatest player ever had something like this in his first deal. Not only because it’s rare, but because one would imagine the Bulls doing everything they could to protect their biggest asset from getting hurt. Imagine if Michael Jordan had twisted an ankle during a pickup game with Joe Schmo at the community rec center that cost him actual NBA games. Talk about terrible luck.

Fortunately, that never happened, but the risk itself is why players like the NFL’s Patrick Mahomes (among other athletes) have clauses that prevent them from doing anything that could risk injury. But Michael Jordan’s always been a different breed, and he wasn’t going to let anything hold him back from playing a little hoops anytime he wanted to.