Longtime NBA Writer Calls B.S. On The Mystique Of Michael Jordan’s Flu Game And Offers Up Own Theory Of What Happened 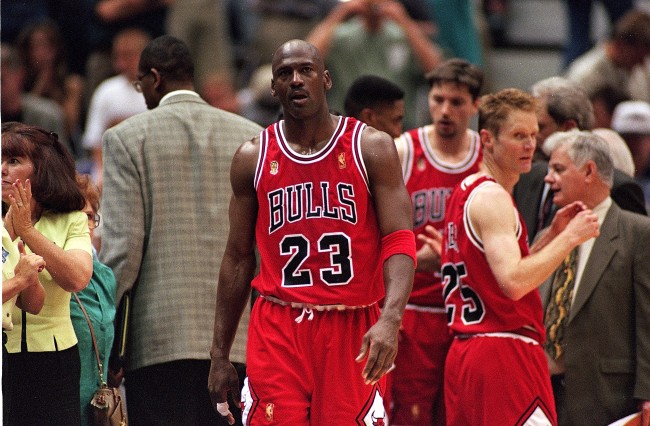 The Michael Jordan flu game is one of the most iconic memories that the six-time NBA champ ever gave us, as it proved that, no matter what was thrown his way, the guy was going to push himself like hell to overcome it and succeed. As most of us remember, the legendary MJ performance came during a critical Game 5 against the Utah Jazz in the 1997 NBA Finals, with Jordan leading his Bulls to a 90-88 victory by dropping 38 points, 7 rebounds, 5 assists, 3 steals and 1 block in 44 minutes. To this day, it’s still insane to think the GOAT could perform at that level given how rundown he was physically.

But what if the whole thing was a little bit fabricated? If Jordan didn’t actually (allegedly) get poisoned by a handful of pizza delivery guys the night before Game 5? And if MJ and his inner circle just decided to add some juicy details to further expand the legend of Michael Jordan?

Joining The Dan Patrick Show, Smith detailed his stance on the flu game, and disputed the entire validity of it — which is a theme he’s had following The Last Dance documentary, even claiming MJ lied about a number of things — while offering up his theory about what really happened to MJ before Game 5 of the ’97 Finals.

“It wasn’t food poisoning. He made that up.”

“He wasn’t poisoned. That’s not what happened.”

“Michael Jordan, the most protected, nobody knows where he is, secure person – all of a sudden, five guys from the pizza place show?”

“He was ill. There’s no question. I think – I think – he had something that wasn’t as manly as maybe some other episodes. I think because what they were doing was going up to Park City, in the mountains, in the ski area to stay. That’s where they stayed. So, they had to practice in Salt Lake City. They kept coming in and out, in and out. And I think it was altitude sickness. The symptoms that he had fit that much more than anything else that he had.

“There was some sort of illness. There’s no question he was ill. I wouldn’t deny that. He definitely was. He was sick. But he wasn’t poisoned.”

These are some serious claims by Smith, who is blatantly calling out Michael Jordan and his longtime trainer, Tim Grover, on their B.S. of a story. While the journalist is just that, a journalist, and doesn’t have a medical background, seeing how the story changed from the “flu game” to the “food poisoning game” does make you wonder if Sam Smith’s onto something here. Plus, the Salt Lake City altitude does have an impact on people, so who knows if Jordan’s body just reacted weirdly before Game 5 that series.

Regardless of what really happened, the Michael Jordan flu game is being debated some 23 years after it actually happened; which is just incredible to think about, and goes to show just how enthralled everyone still is with His Airness. The Last Dance documentary gave us a lot of stories and behind-the-scenes clips of MJ and the Bulls, but it also opened the door to some questions about what really happened during the Bulls’ run to six titles in eight seasons — and, given the mystique of the flu game, it makes sense that Sam Smith’s questioning its accuracy.