Does Anybody Else Remember How Close Michael Jordan Was To Joining The Knicks Back In The Day? 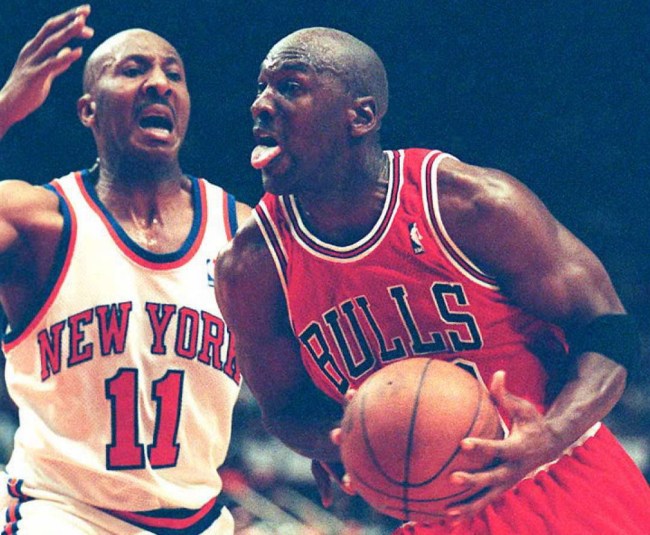 Michael Jordan used to absolutely torch the New York Knicks, with some of the GOAT’s biggest games coming against the Eastern Conference rival. Regularly meeting in the postseason during the ’90s, MJ did damage anytime Patrick Ewing and his boys went up against the Bulls, with the bad blood evident each time the two squads took the floor. If you’re a kid of the ’90s, you surely remember the intensity.

While the two teams really hated one another, did you know that Michael Jordan actually explored the possibility of joining the Knicks when he hit free agency during the 1996 offseason? It sounds insane now — especially because His Airness ended up staying with the Bulls for two more seasons and winning a couple more championships — but, no joke, it was a real possibility.

As the story goes, when Jordan’s contract with Chicago expired following the 1996 title — a season in which the Bulls won a then-record 72 regular season games, and his first full year back after 1.5 years off from the NBA — MJ was reportedly looking for a “balloon” payment; or a massive pay increase for one year. Ewing had just received something similar from the Knicks, getting $18 million per season. At the time, that was the largest single-season deal in the league, so you know Jordan wanted his.

After New York’s season (once again) ended to the Bulls in the ’96 postseason, the team was apparently confident it could convince Michael Jordan to do the unthinkable: Leave Chicago for New York. Just look at how NBC Sports described the scenario.

The Knicks were confident they could snag “His Airness” for a few reasons. Ewing and Jordan had a strong friendship, dating back to their college years. Ewing even had taken a recruiting visit to North Carolina as a rising freshman, in which he and Jordan got into an intense one-on-one pickup game that Ewing and Tar Heels coach Roy Williams remembers well. Their relationship strengthened over the years as they would become rivals throughout almost the entirety of their NCAA and NBA careers.

Jordan was confident that he and Ewing could win an NBA title simply adding him to the roster the Knicks had, fitted with tough players like Allan Houston, Larry Johnson and Charles Oakley, another good friend of MJ. Longtime Chicago Tribune beat writer Sam Smith was all over the story that offseason and reported that the key to the Knicks efforts to sign Jordan was their deal with ITT-Sheraton and Cablevision Inc.

It was reported by Smith that the structure of the deal may have been about $12 million from the Knicks and another $15 million or so from ITT/Sheraton Hotels.

Obviously, this didn’t end up happening, but it’s crazy to think Michael Jordan and his agent even got this far into discussions with the Knicks back then. The hatred between New York and Chicago was insane, and, to put it into perspective, it would’ve been like seeing LeBron James leave the Cavs in 2018 to join the Golden State Warriors after facing them in four-straight NBA Finals.

According to that NBC Sports piece, Jordan’s agent, David Falk, reportedly told Bulls owner Jerry Reinsdorf that he had “one hour, maybe the rest of the day” to match (and surpass) a significant, $25 million offer from the Knicks. Talk about just a little bit of pressure, right?

Reinsdorf came through, giving MJ a one-year deal worth $30 million, which became the largest deal in NBA history at the time. Still, it took some hardball by Jordan and his agent to get it.

Who knows if Michael Jordan was just playing a game with the Bulls in order to get his balloon deal, using the Knicks as a ploy in order to get paid. Whether that was the case or not, it ended up working for both him and Chicago, with the franchise adding those two more titles in the following years. But Jordan loved playing in Madison Square Garden, so, who knows, maybe this was something he was seriously considering had Reinsdorf tried to call the bluff.