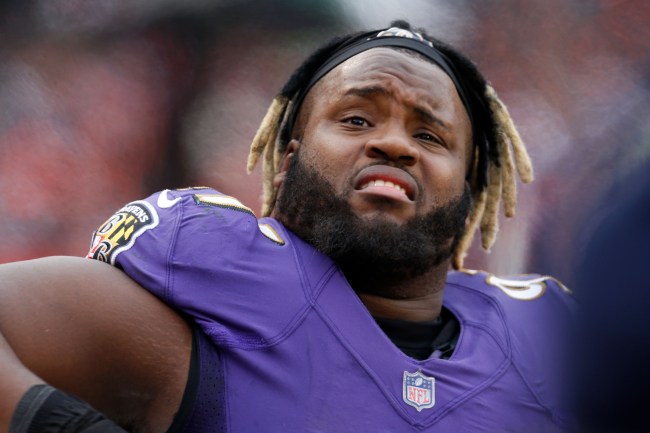 Ravens defensive tackle Michael Pierce is in his contract year, meaning he has every incentive to dominate this season to secure a lucrative contract in the meat of his career.

The 26-year-old did not participate in Ravens’ offseason workouts so the first glimpse the team got of him was at Tuesday’s mandatory minicamp. And lets just say, he was more than present.

Pierce, who reports claimed to be well over his playing weight of 340 lbs, was sent off the field due to “lack of conditioning.”

Via @lightforall, here are a few shots of Ravens defensive tackle Michael Pierce warming up. He headed inside the team facility after talking with John Harbaugh. pic.twitter.com/dCDsOzEgRm

Pierce briefly spoke with coach John Harbaugh before getting booted from practice. Harbaugh commented on the situation to reporters after practice:

“He’s not ready to practice from a safety standpoint and for his health. We recognize that and pulled him off.” Harbaugh added, “He’s not ready for this practice yet. I think you could probably tell.”

So patronizing to get kicked out of practice for your own good.

“Of course you are disappointed with him. What I said to him, and I said it in front of the whole defense: life’s about choices. Just don’t make that choice make your life. He’s a dominant player and he’s got a challenge from here until training camp to hit a certain stage, and that’s up to the trainers and Eric and Harbs on where they want him to be at. I know he’ll be there, I know he will. I think we piled on him enough yesterday. I saw some of the things my friend sent me through Instagram. Lets don’t forget what a great football player he is, and he’ll get back there. I can’t tell you when, but he’ll get back there.”

For those who haven’t seen Coach Martindale, him being disappointed over choices surrounding weight is peak irony.

Regarding Michael Pierce being out. Wink Martindale is confident he'll get in shape but "disappointed, life is about choices" #Ravens pic.twitter.com/pkbHuI8MAb

Mind you, Pierce busted his ass to make it in the NFL. He signed with the Ravens as an undrafted free agent out of Samford after running the 10 meter split faster than any DL at the combine and performed a broad jump inside the Top 15 for DL. He appeared in all 16 games his rookie year.

But, there’s no question the dude took some liberties this offseason. Must’ve done some serious chillin’ with Ryan Fitzpatrick aka THICCpatrick.

Always been a Michael pierce fan. I knew he was gonna blow up this year https://t.co/uJ8vMkGiI9

Can a man live?