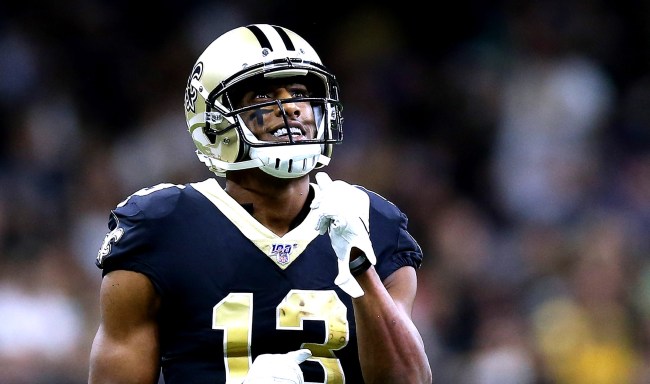 Michael Thomas, the star wide receiver for the New Orleans Saints, has never been one to shy away from publicly expressing his opinion.

So when he was informed by the NFLPA that the league has proposed taking 35 percent of each player’s salary for the 2020 NFL season and placing it into escrow to help franchises better manage costs during this time of uncertainty, Thomas was one of the first, and most vocal, NFL players to strongly come out against the idea.

Thomas, as he often does, took to Twitter to suggest that if this escrow proposal gets pushed too hard by the NFL, players will just sit out and wait for a better deal.

Lol everyone will sit out and not play until they get their stuff together before we do this 😂 https://t.co/cqOuQfQvr8

Later, when $500 million man Patrick Mahomes of the Chiefs also expressed shock at the NFL’s escrow proposal, Thomas replied that it “has to be a joke” and saying the idea is “about as backwards as it gets.”

Has to be a joke lol 😂😭😭. Roger and those owners better use their billions and put it in escrow or plan accordingly. Our health is way more important. This is about as backwards as it gets 😭😂😂🥴 https://t.co/Egq2RaYsuO

The proposal is described as an “option on the table.” And it’s one hell of an option.

NFL Media previously floated the possibility of salary givebacks this season, given that the league is facing lost revenue from fewer (or no) fans at games and fewer (or no) preseason games. The cancellation of regular-season games would reduce revenues even farther.

The labor deal has no mechanism to permit salary reductions. At best, if no games are played, the league would be able to argue under the language of the standard player contract that no duty to pay player salaries ever arises. If only one game is played, the CBA supports an argument that the players get their full pay.

Part of the issue stems from the fact that the players are pushing to have no preseason games, which would then further reduce each team’s revenue. The league has floated the idea of holding just two preseason games, still several games less than in a normal season.

Add in the fact that games are potentially going to be held without tens of thousands of fans paying exorbinant ticket prices and concession fees, and the owners are anticipating taking a serious bath this season.

Hopefully, these negotiations, if you can even really call it that – there’s already in ironclad CBA in place – go slightly better than it did between Major League Baseball and the MLBPA.

How did the NFLPA react to the NFL's proposal to escrow 35% of player salaries this season?

Union's stance is any escrow deal must be collectively bargained. https://t.co/b3c7ihAOiD