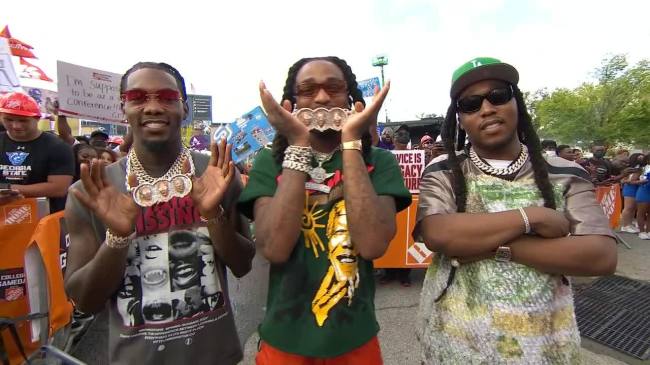 College football is back and so are the bands. To celebrate the return, Migos joined the blaring brass for an epic performance on Saturday morning.

With a Week 0 slate ahead, College Gameday was back on the air with fans in attendance and Lee Corso at the desk. The ESPN crew traveled to Atlanta to begin its season and featured a HBCU matchup between Alcorn State and North Carolina Central in primetime.

The energy is electric at GameDay ⚡ pic.twitter.com/bYPwYpsEdB

It has been a combined 1,200 days since either team last took the field and it is the first HBCU matchup of the season.

A big part of the Historically Black College and University experience is the marching bands.

.@WCRhoden examines the relationship between HBCUs and football, and how football Saturdays "are an unfettered celebration of Black love."@TheUndefeated pic.twitter.com/JBchWfEqry

To join in on the celebration, Migos was in the house. The Atlanta-based rap group has long been a voice for HBCUs and is often involved with ESPN’s coverage. Offset broke it down with the bands on Friday.

And they spoke about how proud they are to be apart of the weekend.

When it was time for Gameday, Migos showed up with the drip and had the place jumping.

With the accompaniment of the Alcorn State and NC Central bands, the trio played their hit ‘Straightenin’ and it was awesome.

Here is the full performance:

Migos also made its pick for the two teams first games since December of 2019. They’re riding with Steve McNair’s alma mater.

Football is back and it feels so good. Migos and the HBCU bands was an added treat that made the morning that much better.