Kissing An Opponent On The Head In The Olympics Is The Ultimate Alpha Move, What The Games Are All About 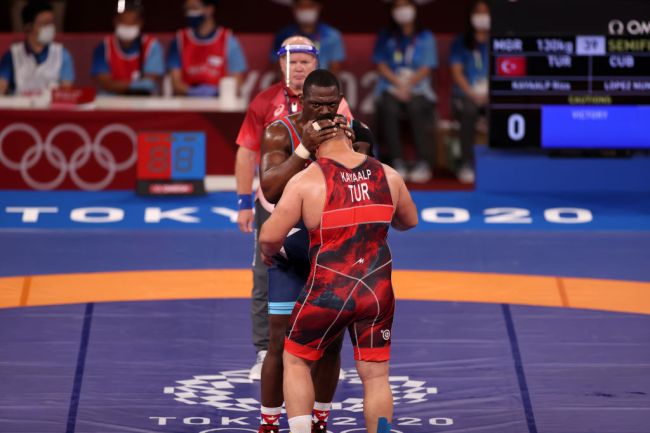 Mijain Lopez and Riza Kayaalp are big rivals in the world of wrestling. The two faced one another in the Tokyo 2020 Olympics and Lopez performed a moving act of sportsmanship after the match.

It also established his dominance as an alpha for years to come.

Lopez, from Cuba, was facing Kayaalp, from Turkey, in the semifinals of the Greco-Roman wrestling 130kg weight class. The two engaged in a tough, back-and-forth match that Lopez went on to win 2-0.

After the match finished, the two shared an embrace of mutual admiration. Amid the moving moment, Lopez grabbed Kayaalp by the back of his neck and placed a kiss upon his forehead.

It was a touching tribute to his hard-fought opponent and encompassed everything that the Olympics are all about— sportsmanship, honor and respect.

However, it was also a demoralizing moment for Kayaalp. He had just lost a chance at the Olympic final and was completely dominated by Lopez as he kissed his head.

The two longtime competitors have now met seven times and Lopez leads the series 5-2. He has won all three of their matches at the Olympics, propelling him to a gold medal in 2012 and 2016.

After defeating Kayaalp in Tokyo, Lopez won gold in the final and completed a four-peat in the event. Kayaalp won his bronze medal match.

The level of love and respect that Lopez showed for his opponents is truly special. However, for him to kiss the man he just beat on the head and then go on to win gold proves just how dominant he really is.