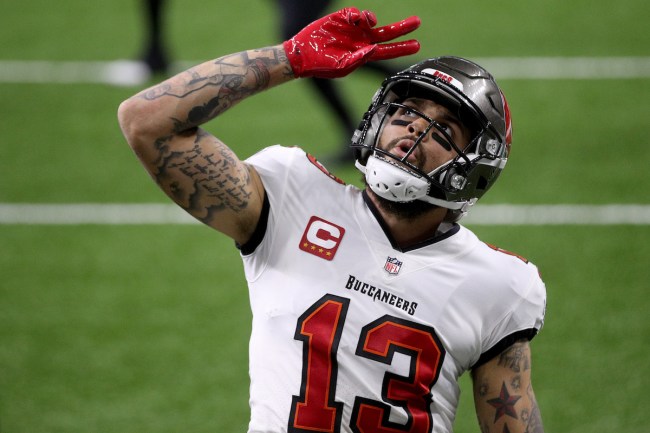 Don’t get me wrong, Bucs wideout Mike Evans is an absolute stud who has worked his ass off to become one of the most dominant players in the league at his position. Surpassing 1,000 yards receiving in each of his first seven years since the team drafted him No. 7 overall in the 2014 NFL Draft, Evans sure has endured his fair share of tough times in Tampa.

From winning just two games in his rookie season, to having just one year with a winning record (2016) prior to this year’s 11-win campaign, Mike Evans has helped turn the entire franchise around. Of course, it didn’t hurt getting some guy named Tom Brady to leave the New England Patriots with his six Super Bowl rings and join the wideout. Or adding two future Hall of Fame pass-catchers named Rob Gronkowski and Antonio Brown. Or getting a Pro Bowl running back (Leonard Fournette) for nothing after he fell out of favor in Jacksonville. But, hey, the team’s in the NFC Championship Game, so kudos to them.

Point is, while Evans himself has endured a helluva lot of hard times with the Bucs, the team accelerated itself into Super Bowl contention this offseason by getting Brady, Gronk, Brown, Fournette and others. It’s like when my Cleveland Cavs went from the NBA Lottery and fetching No. 1 picks to instantly competing for NBA titles by seeing LeBron James return to the franchise in 2014 — then pairing him with Kyrie Irving and trading for Kevin Love. It sort of cut corners, and, honestly, nothing’s wrong with admitting that.

But Mike Evans didn’t acknowledge that Wednesday when talking about the Bucs reaching this year’s NFC Championship Game. In fact, he flat out said the franchise didn’t “take the easy road” to get to where they are this season. Take a look below at the wideout’s proclamation.

"We’ve been losing for a long, long time and didn’t take the easy road out," he says. "We saw some bad days. We’re happy to be in the position we are now." pic.twitter.com/9svcdQnRCf

Well… that’s a bit debatable. While Mike Evans has gone through a lot since joining the Bucs and he’s more than likely claiming that he didn’t take the easy road, as a franchise, Tampa Bay sure as did by signing three future Hall of Famers and a Pro Bowler on offense. That’s not to diminish anything Evans has gone through, or to take away from what the team has accomplished this year, but it’s fact.

Not taking the easy road would have been for the Bucs to stick with former No. 1 overall pick Jameis Winston under center. For the team to build off of the 9-7 record during the 2016 season and continuing to ascend to get to this point. It didn’t do that, and it built a video game-like roster in just one offseason.

Of course, Mike Evans isn’t going to admit that (nor should he). But I’ll be damned to think that this season’s Bucs team didn’t take the easy road. Yeah, you’ve still got to mesh all the personalities together, stay healthy and actually go perform, but this roster was built for a Super Bowl run, which couldn’t have been said about any other squad in previous years.

The past six seasons absolutely wore on Evans. He worked hard to stay one of the best receivers in the league, even with inconsistent quarterback play. So it’s cool for him to say he specifically stuck it out and took the difficult road, but, deep down, he has to acknowledge the fact that the Bucs roster is loaded this year, and that expectations immediately increased the minute perennial winners Brady, Gronk and AB walked through that door.