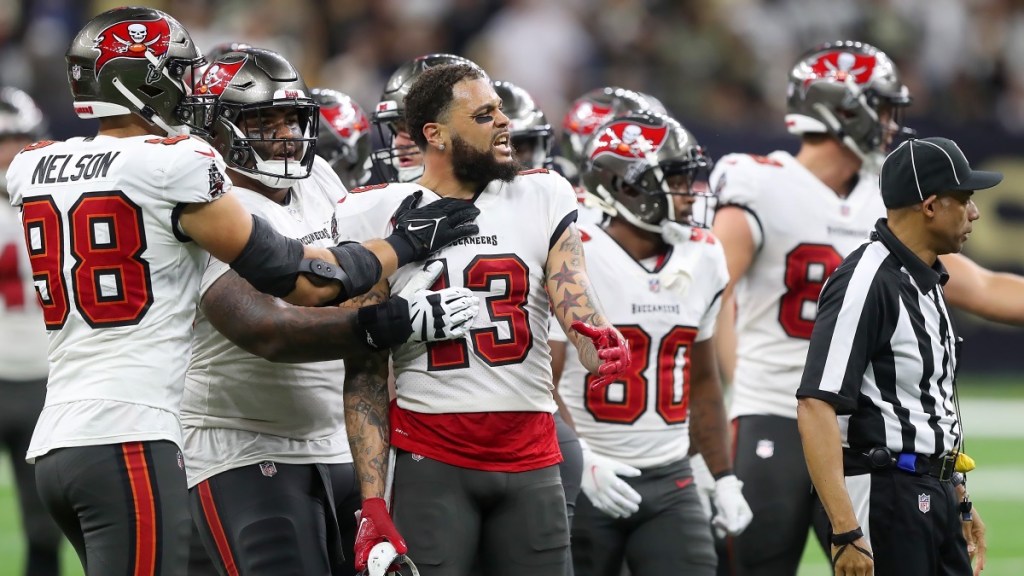 The 1-game suspension of Tampa Bay Buccaneers wide receiver Mike Evans was upheld after he appealed to the league. This means that Tom Brady’s top target will be suspended for one game without pay. He will be missing the Bucs’ Sunday afternoon game against Aaron Rodgers and the Green Bay Packers. The league also made its final determination about Bruce Arians‘ role in everything.

If this happened last year, Mike Evans would have lost a literal fortune due to being suspended without pay. Most NFL contracts are structured so that players are paid out per game instead of on a monthly salary.

Mike Evans and the Tampa Bay Buccaneers restructured his contract in the offseason and this savvy move saved the Bucs’ #1 WR over $650,000. This is because after restructuring, Evans is earning a league-minimum $1.12 million.

Mike Evans Saved Fortune After Being Suspended Thanks To Savvy Move

Adam Schefter reports that Mike Evans will lose $62,222 for his 1-game suspension but if this were to happen without restructuring his contract, Evans would have forfeited $715,000:

Bucs WR Mike Evans restructured his contract during the off-season, which lowered his 2022 base salary to a league-minimum $1.12 million.

This means that this week’s one-game suspension now will cost Evans $62,222 rather than the $715,000 it would have if he hadn’t restructured.

At the end of the day, this suspension isn’t about the money. The Tampa Bay Buccaneers and wide receiver Mike Evans are being heavily penalized by not having one of the league’s best WRs on the field.

Evans hold pretty much every receiving record in the Tampa Bay Buccaneers franchise. Since being drafted #7 overall by the Bucs in 2014 he has put up Hall of Fame level stats and is the only wide receiver in NFL history to start his career with 8 straight seasons of 1,000 or more receiving yards.

What Bucs fans are saying about this contract revelation…

Mike Evans really does hate Marshon Lattimore, so I dunno…

Mike’s been planning this hit for months

ESPN’s Adam Schefter did fumble the tweet. He forgot to include ‘Evans’ and had to delete and tweet again and Shefty’s getting clowned on pretty hard:

Thanks for clarifying. We couldn’t figure out which mike it was based on the second paragraph

It really is good news for Mike Evans getting to keep that $650K for his role in the Lattimore fight:

We’ll…that’s looking at the glass half-full

Mike Evans will now return for the Buccaneers game against the Kansas City Chiefs on October 2nd. I’m sitting here wondering what the heck the Bucs did to the NFL scheduling crew that led to them facing Green Bay and Kansas City in back-to-back weeks…