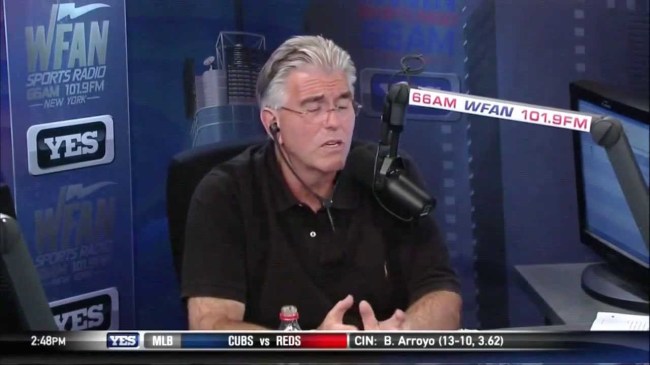 Mike Francesa is a f*cking god in the sports media world, especially when it comes to sports talk radio. Having done his job for more than a few decades, the guy didn’t only build up a cult following from his time on air, but he’s so popular that ESPN’s 30 for 30 series even did a documentary on him and his former partner, Chris “Mad Dog” Russo.

Unfortunately, Francesa is wound up a little bit too tight about, well, everything. And, while that was obvious before today, if you ever didn’t realize it, his latest ascinine rant about Todd Gurley and an NFL referee swapping jerseys after the NFC Championship Game yesterday should be all the evidence you need that the guy needs to take a serious chill pill. Why? Because the picture Mike Francesa references in his rant was faker than a pair of breasts in Los Angeles, guys.

To refresh your memory, here’s what photo that Todd Gurley posted to his Instagram account shortly after his Los Angeles Rams beat the New Orleans Saints to reach the Super Bowl.

Of course, the humor in all this is that the refs missed one of the most blatant pass interference calls on planet earth, refusing to throw a flag that, presumably, would have led to the Saints, not the Rams, winning the game. It’s fun. It’s laughable. It’s entertaining. It’s fake.

Well, don’t tell that to Mike Francesa, because here’s what he had to say on air today about the photo — which, at the time, he didn’t know was photoshopped.

To paraphrase Francesa, here you go, via FTW.USAToday:

“If you were the referee of that game, and you didn’t realize you had a problem on your hands and that is your honest statement, you should be fired. You should never have another jersey whether you exchange them with players before the game, which should be an outrageous thing to begin with. No way should an official be exchanging jerseys with a player before a game. That’s such a bad thing to do.”

Dude, have you ever heard of a joke before? My god, Mike, you are the epitome of one of those “get off of my lawn” kind guys, so take a deep breath and know that everything will be OK. It was just Gurley have some fun at everyone’s expense.

Thankfully, a producer finally did tell Mike Francesa that the thing wasn’t real, but the damage (and embarrassment) has already been done. Take a look below at that video.

During the commercial, Big Mike learned that he got got. pic.twitter.com/EoFIoaO7q7

Maybe next time Francesa should consider ranting about something he’s a little bit more knowledgeable about, because this is pretty bad. But, hey, dust yourself off and go get ’em again next show. Oh, also learn how to take a f*cking joke once in awhile, brother.