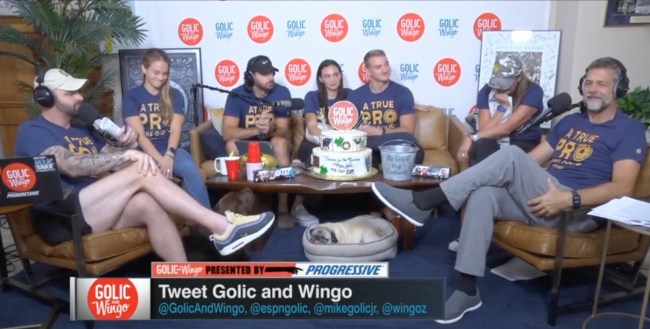 ESPN announced a number of changes set to be made to its radio lineup earlier this month that are set to take effect in August. One of the changes includes ‘Golic and Wingo’ being replaced by another show meaning Mike Golic’s 22-year-run on ESPN radio would come to an end at the end of July.

Well, here we are on July 31, and Golic’s entire family joined him on set for the show’s final segment. Mike Golic Jr. grabbed the mic and delivered an extremely heartfelt message about his father. Things seemed to be going ok up until the moment Golic Jr. explained that yes, the mics will be turned off and his dad’s time on ESPN radio is coming to a close, but even after the fact, Golic still gets to be their dad.

This is an ultimate tearjerker for all the fathers and sons out there, you’ve been warned.

Golic’s future at the network is up in the air at the moment. His wife, Christine, recently claimed that Golic pitched a ‘Mike & Mike’ return to the airwaves, but the network wasn’t interested. She also stated that her husband isn’t ready to retire.

Golic sat next to Mike Greenberg on ‘Mike & Mike’ for almost 20 years creating one of the most popular sports radio shows in the United States. Greenberg, who is set to return to the airwaves in August, paid tribute to his longtime friend and colleague during an emotional segment on ‘Get Up’ earlier in the week.

Both Golic and Greenberg were inducted into the NAB Broadcasting Hall of Fame in April of 2016.