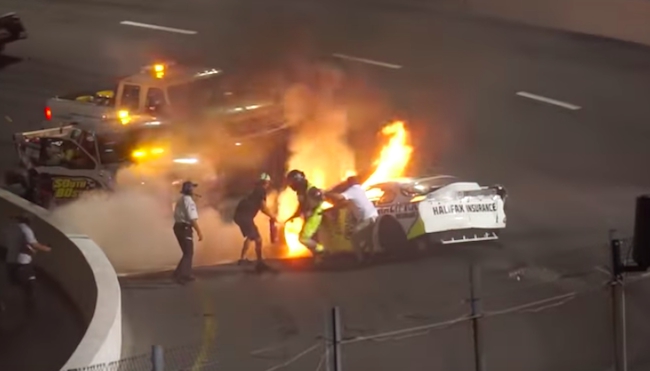 There are plenty of people out there who don’t consider auto racing a sport as if the average person could hop behind the wheel of a car reaching speeds of 200 MPH and navigate it around a track for hours at a time without crashing into something. Now that we live in a world where a Fortnite tournament has a $100 million purse I think we can finally end the debate about whether or not race car drivers are athletes.

Racing is one of the most dangerous sports in the world and the people behind the wheel (and even the fans in the stands) put their lives on the line every time they hit the gas when the green flag waves. Despite the precautionary measures in place, there’s only so much you can do to reduce the risks that come with driving into a wall while traveling the same speed as an Acela.

Driver Mike Jones (who as far as I know has no relation to the rapper of the same name) found himself in a hairy situation over the weekend when he spun out after being bumped by another racer at South Boston Speedway and crashed into a barrier. His car immediately burst into flames, and while he struggled to get out, his dad ran out onto the track and pulled him out of the wreckage just seconds before it really erupted.

Here’s to hoping Jones got his dad one hell of a gift for Father’s Day. A rescue like that deserves at least two ties.