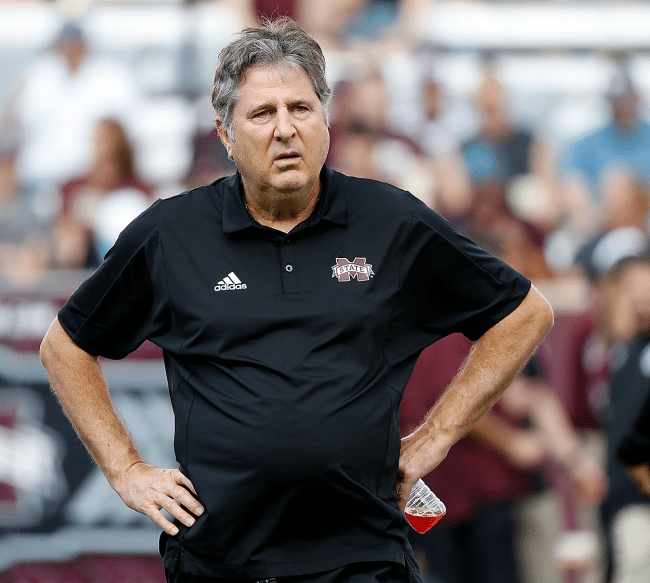 When it comes to college football, there are very few characters quite like Mike Leach. The 60-year-old head coach of Mississippi State football is not only one of the fathers of the air raid offense, but he is a brilliant individual and an unbelievably entertaining personality.

Leach, who was raised in the Church of Jesus Christ Latter-day Saints earned a BA from BYU, a Juris Doctor from Pepperdine University School of Law and is one of the most prominent graduates of the United States Sports Academy, from which he earned a Master’s of Sports Science in sports coaching. All of that goes to say that he is a smart guy, but you might not assume so by his demeanor.

Beyond his qualifications, Leach is incredibly entertaining. He recently stopped by MSU’s volleyball practice to discuss Bigfoot, has visceral opinions about Halloween candy, and has wild hopes for the College Football Playoff.

Although Leach is stuck in one of the worst cities in America, he is quickly changing the culture of the Bulldogs football program. After a few years of relative success with the ever-nauseating Dan Mullen, the team fell into a deep valley under Joe Moorehead.

Leach was then hired in a kneejerk, panicked reaction to in-state rivals Ole Miss hiring Lane Kiffin. He was tasked with bringing Mississippi State — a school that is forever irrelevant to society — back to relevancy on the gridiron. It is not an easy ask for anyone, let alone a coach trying to run the air raid in the Southeastern Conference.

Despite the uphill battle, he has done a decent job so far.

The Bulldogs aren’t competing for national titles, but they play good football and reached bowl eligibility on Saturday. To reach a bowl game in 2021, Mississippi State came back from the largest deficit in school history.

Auburn took a 28-3 lead over Leach’s bunch during the second quarter and went on to lose 43-34. Bulldogs quarterback Will Rogers QB went an astonishing 24-26 with five touchdown passes in the second half.

After the win, Leach celebrated with his team in the locker room. His antics were the epitome of Mike Leach.

First, a player went live on Instagram and asked his head coach to comment. Leach said, simply, “congratulations to the Bulldogs!”

If that wasn’t funny enough, it came time to dance. Leach stood, completely anchored, and just waved his hands over his head. It’s perfect.

Do your dance, Coach Leach!