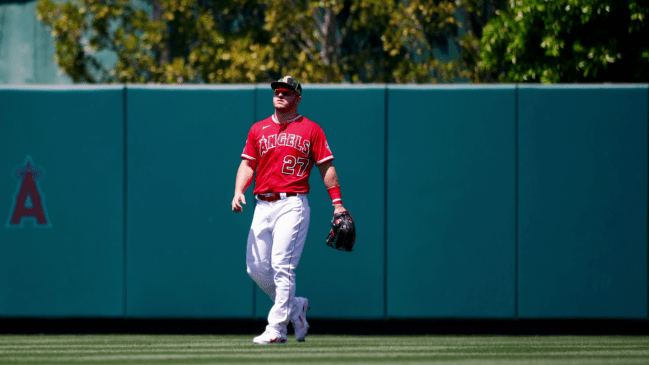 Mike Trout was the latest player to be drug into the Tommy Pham fantasy football tantrum.

Pham was videotaped slapping Giants outfielder Joc Pederson last week for what he called “cheating” in a high-stakes fantasy league. Pederson denies breaking any rules with his actions, saying he’s got the evidence to back it up.

The slap landed Pham a three-game suspension, which he’s yet to return from, though he should find himself back in the lineup very soon. But just when we thought the bizarre story was behind us, Pham brought another MLB star into the mix.

The Reds outfielder called Mike Trout the “worst commissioner in fantasy sports” earlier this week, saying that he was the one who ultimately allowed Pederson to run wild in the competitive league.

Had Trout laid down the law, Pham says that he could’ve put an end to Pederson’s alleged cheating. Instead, he did nothing and allowed the league to get out of control.

The Angels centerfielder bit back on Wednesday, commenting for the first time on the subject.

Mike Trout comments on the fantasy football league, calling Commissioner Rob Manfred out in the process

Mike Trout declined to comment on whether Joc Pederson violated the rules of the fantasy league. He said he is unsure if he’ll resign as commissioner for this coming season. “Every commissioner I know gets booed,” he said.

Trout declined to get too in depth with his response, simply saying he’s unsure if he’ll resign as commissioner following this fiasco.

“Every commissioner I know gets booed.” – Mike Trout

His response, while true, seemed to take a slight jab at MLB leader Rob Manfred. It’s no surprise that many around the game don’t necessarily like the Major League Baseball commissioner.

Those opinions grew stronger with the holdout that caused a delay to the start of the 2022 season. Making things worse, Manfred seemed more concerned about his golf swing than coming to a compromise. Trout was one to make his opinion known, posting about the lockout on social media and calling the commissioner out in the process.

Regarding The MLB Lockout: pic.twitter.com/QQUC1pWr5F

While his comments on the fantasy football league were made in jest, there could be a little more meaning behind his views on being the commissioner than he’s letting on.