Mike Tyson Says He Was On Shrooms When He Fought Roy Jones Jr. In 2020 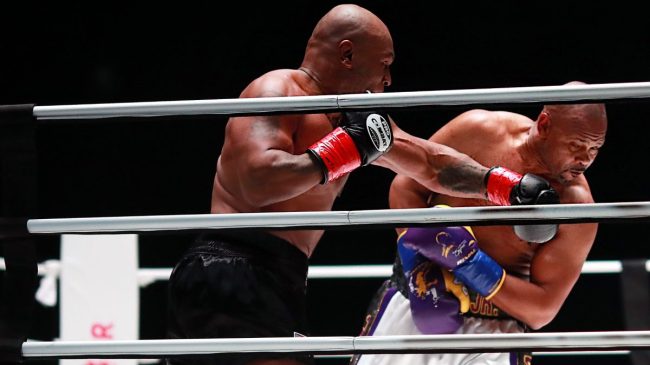 Mike Tyson was one of the most dangerous boxers of his era. That deadly left hook could end a bout in a heartbeat, and the heavyweight fighter did so on many occasions.

But he says there’s something he wished he would’ve done earlier in his career that could’ve made him even better.

Tyson appeared on the Pivot podcast earlier this week to talk about his boxing career, and life in general. The fighter has gotten into herbal remedies since his boxing days ended.

He runs a 420-acre weed ranch in Southern California. He says that cannabis is the future, and he truly believes in its health and wellness benefits.

Apparently, he’s dabbled in shrooms, too. When talking to Ryan Clark, Channing Crowder, and Fred Taylor, Tyson dropped a little tidbit about a recent bout against Roy Jones, Jr.

Mike Tyson says he was on shrooms when he fought Roy Jones, Jr.

Fred Taylor and Channing Crowder asked Mike Tyson if his taking shrooms and weed was a form of “self-medication” in an attempt to run away from his problems. Iron Mike said the opposite.

“We don’t use this to run away… It helps me train, it helps me box better. When I’m fighting, I really don’t feel the punches. It’s really just like some magical sh-t. You saw me just fight. I was on shrooms.

“I wouldn’t fight without them, are you crazy? And some weed. I wish I did this sh-t in my career, I’m so f–kin’ mad I didn’t know about this sh-t.”

Tyson refers to a 2020 matchup against Roy Jones, Jr. Although the fight ended in a draw, he says the mushrooms definitely helped him.

And he wishes he could’ve done it in his prime.