Tyson Fury Says ‘Hell Yeah’ To Exhibition Fight Against Mike Tyson, But Nothing Has Materialized Yet 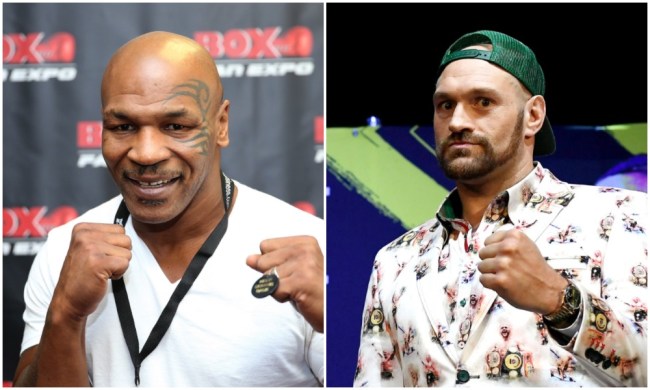 Mike Tyson has made serious headlines over the past month after announcing on Instagram Live that he was starting to train again in hopes to fight in ‘three or four-round exhibition matches.’ Since then we’ve seen plenty of insane workout videos of the soon to be 54-year-old working his tail off and Bare Knuckle Fighting Championship is reportedly set to offer him a contract over $20 million.

It sounds like Tyson has one man in mind that he’d like to step in the ring with, reigning WBC heavyweight champion Tyson Fury, who was actually named after Tyson. Fury said he was contacted by someone who threw out the idea of an exhibition match and was excited about the possibility.

“I had a phone call saying, ‘Would you like to fight Mike Tyson in an exhibition fight?’ I said, ‘Hell yeah,’ but I don’t think anything’s materialized out of it,” Fury said in an interview with BT Sport published Tuesday.

Again, a fight against Fury would just be a charitable exhibition match, but it would still be quite the scene to see a 31-year-old Fury, who is 11 inches taller than Tyson, step into the ring with the iconic fighter.

There has also been chatter that Tyson could square off against 57-year-old Evander Holyfield, which would be a much more even playing field. Fury stated that “if they’re both medically fit to fight, then let them do what they’ve got to do. It’s their life, not mine.”

Tyson last fought in 2005 when he lost in six rounds to Kevin McBride.