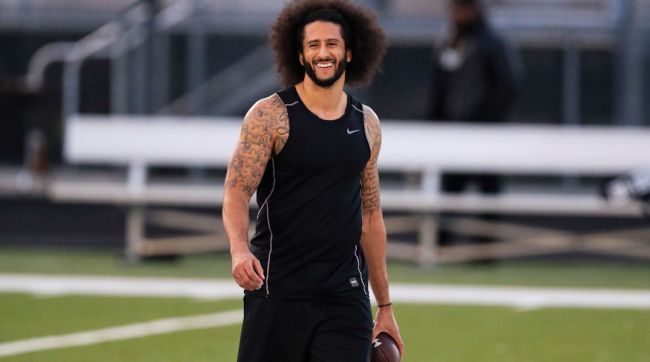 Given what Drew Lock has shown in the league so far, not many people are expecting him to develop into a franchise QB, meaning the NFC West club will likely be in the market for another quarterback. With this in mind, ESPN NFL analyst Mina Kimes suggested that the team should give 34-year-old Colin Kaepernick “a look.”

Zero reason for Seattle not to at least give him a look. (And before anyone responds with the usual blather about Gabbert, etc—take your meme-driven misinformation elsewhere.) https://t.co/81qMvxKuMp

Kaepernick, originally drafted out of the University of Nevada in the second round by the San Francisco 49ers in 2011, has not played in the National Football League since 2016. Leading the Niners to the Super Bowl in 2012 — they ultimately lost Super Bowl XLVII to the Baltimore Ravens by a score of 34-31 — Kaepernick completed 59.8% of his passes for 12,271 yards, 72 touchdowns, and 30 interceptions, and rushed for 2,300 yards and 13 touchdowns during his six-year NFL career.

Back in the summer of 2020, Seahawks head coach Pete Carroll claimed that he regretted not signing Kaepernick when he had the chance in 2017. Seattle did not sign the former NFC Champion for that season, though, as Carroll said the team was happy with Geno Smith as Wilson’s backup.

RELATED: Mina Kimes Torches Cardinals After Their Attempt To Troll Her Following The Russell Wilson Trade