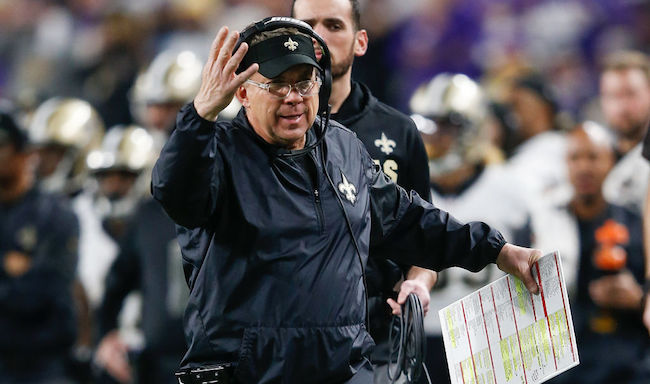 On Sunday, the Minnesota Vikings managed to pull off one of the most improbable finishes in the history of the NFL when Stefon Diggs took a pass from Case Keenum to the house as time expired to steal away their divisional game against the New Orleans Saints. The moment, which has been dubbed The Minneapolis Miracle, understandably caused Vikings fans across the country to lose their shit— a nationwide freakout that was documented in an amazing reaction video that was released by the team.

Moments before the final play, Saints coach Sean Payton appeared to mock the signature “Skol” chant that would soon be heard reverberating around the stadium following the TD (it wasn’t the first time Payton had taunted an opponent before blowing a lead to lose the game). Now, a furniture store in Minneapolis is adding insult to injury with a very special offer just for him.

According to Darren Rovell, the International Design Center has offered to give Sean Payton a free sofa to sit on so he can be comfortable while watching the Vikings play the Eagles for a chance to play the Super Bowl at their home stadium.

One of the best parts about this is that the store specializes in Scandinavian furniture, which adds an additional level of disrespect to the offer. It’s worth noting Payton makes an estimated $8 million a year to coach the Saints, so if my calculations are correct, he can probably buy at least a couple of sofas on his own.