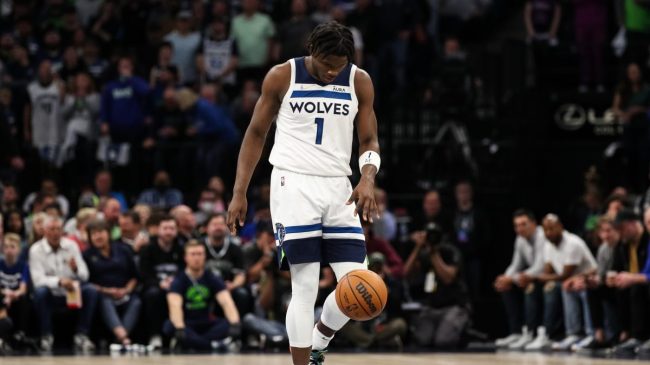 Anthony Edwards is in hot water.

The No. 1 overall in the 2020 NBA Draft took a big step forward in his second year in the league. Edwards averaged 21.3 points, 4.8 rebounds, and 3.8 points per game in his second season. He was also at the center of the Minnesota Timberwolves’ thrilling playoff series with the Memphis Grizzlies.

Edwards’ star only continued to rise in the offseason. He played a leading role in Adam Sandler’s Netflix movie “Hustle” where he served as the movie’s main antagonist. Basketball fans were amazed by Edwards’ acting chops and the film was universally praised.

But now he may have just undone much of that goodwill.

Edwards first found himself as the center of attention after voluntarily posting a video of himself stopping his car to belittle a group of shirtless men across the street.

Anthony Edwards is wild for this man 😭 pic.twitter.com/ccSkkDfe1E

Fans immediately called out Edwards for the video.

He’s not wild. He’s homophobic and ignorant. Edwards went out of his way to show the world his hate. Nothing funny about this at all. https://t.co/iXJFiLaPhx

2022 and people are still tripping over gay people. https://t.co/pCrl3Yddbw

The homophobia is obviously trash, but this culture of recording people minding their business is hella weird. And it sound like he got a girl in the car. Focus, lil baby. https://t.co/DZ8PD2MXRS

It didn’t take long for Edwards to issue a statement apologizing for the video.

What I said was immature, hurtful, and disrespectful, and I’m incredibly sorry. It’s unacceptable for me or anyone to use that language in such a hurtful way, there’s no excuse for it, at all. I was raised better than that!

Though many didn’t find the apology all that authentic.

yea he clearly doesn’t mean this he might as well have tweeted that fredo apology video https://t.co/2JKMg0BsvU

These generic apologies are so pathetic. You were being intentional being a homophobe and recording queer people minding their own business. It’s also interesting that straight men in the NBA have been wearing skirts to fashion week but turnaround and degrade queer men. https://t.co/QZpE4ZF8PP pic.twitter.com/vvFq92xFS7

This dude is homophobic and thinks a tweet will make things better for him lol. https://t.co/qLY77D2inr pic.twitter.com/70X7hGsjGd

Edwards and the TImberwolves enter the 2022-23 season with sky-high expectations. Minnesota made a blockbuster trade in the offseason to acquire three-time NBA Defensive Player of the Year Rudy Gobert.

Edwards and Gobert help form a core that includes Karl Anthony-Towns and D’Angelo Russell. Timberwolves fans hope the quartet can lead their team to its first playoff series win since 2004.

For now, though, Edwards must focus on rehabbing his previously clean image.