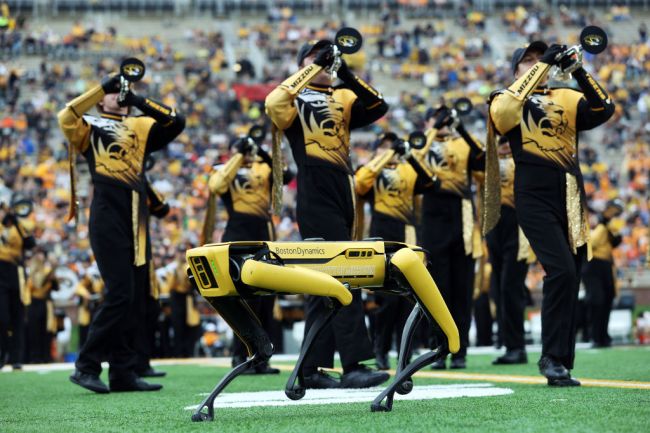 The University of Missouri football team took an absolute beatdown on Saturday, losing 62-24. Although many fans may have left in the first half when the Tigers fell behind 45-3, those who stuck around got to experience a unique halftime show.

As the Marching Mizzou band and Mizzou Golden Girls took the field, they were joined by a unique performer— a robot dog named Spot.

You may have seen Spot(s) on campus in Columbia earlier this year when a group of the Boston Dynamic robots joined in on the school’s freshman Tiger walk. Just over a month later, one lucky robot was selected to dance in front of a crowd at Farot Field.

Spot has some serious moves!

To make the whole performance even cooler, the school’s College of Engineering team was responsible for the choreography.

They programmed the routine from start to finish.

Getting Spot to dance was the easy part. The hardest part of the entire thing, according to engineering professor Krisofferson Culmer, was getting Spot to move in formation with the marching band and with the Golden Girls.

The group has been practicing since the beginning of the semester.

Come halftime, Spot was ready to go. Look at the swagger on this trot out to the field:

Missouri has not said whether it plans to incorporate Spot into its shows more often, but it was certainly a better performance than that of the football team.