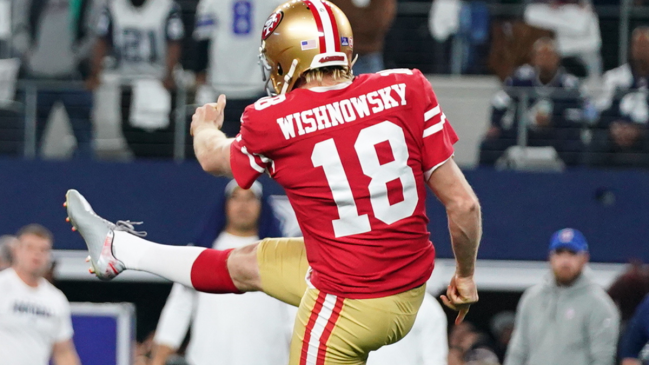 The NFL was home to a few players originally hailing from Australia prior to the turn of the new millennium, but the 2000s saw a major uptick in the number of teams who decided to take a chance on guys hailing from the land Down Under—specifically those with a background conducive to kicking.

The vast majority of the players in question spent years playing Australian Rule Football (commonly referred to as “Aussie Rules”). While there’s no real use attempting to explain the fairly complex nature of the rugby-adjacent pastime, one of the major prerequisites for playing the sport is the ability to boot the ball long distance, which also comes in pretty handy if you want to pursue a career as a punter in American football.

Mitch Wishnowsky is one of the dozens of Australians who’ve taken their talents to the United States over the past decade or so after catching the eye of a college program, and he made quite the name for himself during the three years he spent at Utah (where he took home the Ray Guy Award and earned All-American honors following a stellar sophomore season in 2016).

The Perth native was subsequently drafted by the 49ers in the fourth round of the 2019 NFL Draft, and it’s safe to say he’s been able to hold his own to a point where San Francisco opted to sign him to a four-year extension worth a possible $13 million last week.

Wishnowsky traversed a fairly fascinating path to get to where he is today.

He worked as a glasscutter as a teenager while playing Aussie Rules before being forced to give up the game at the age of 18 due to injury. However, he eventually quit that job to train at an academy in Melbourne devoted to developing kickers and punters for football teams overseas, and the rest, as they say, is history.

As Boss Hunting points out, that injury was a blessing in disguise, as there’s no chance the man known as “The Punter From Down Under” would be raking in the kind of dough he’s earned in the NFL if he’d been able to land a contract with a team in the Australian Football League.

Dustin Martin—the highest-paid player in the AFL—makes an estimated $1.2-1.3 million a year in Australian dollars (between $800,000 and $866,000 in Freedom Bucks) in a job that requires him to exert significantly more time and energy over the course of a game than Wishnowsky has to during an NFL contest.