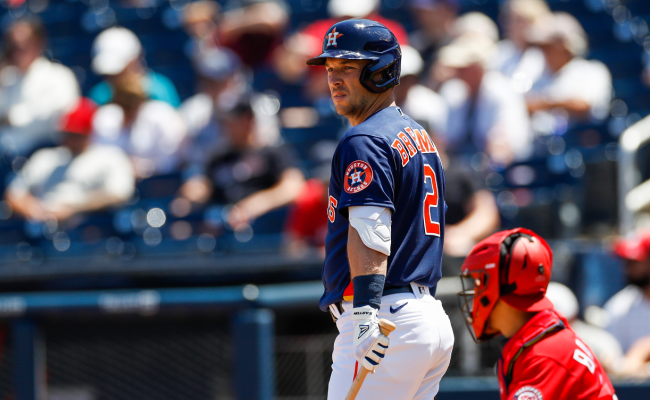 Major League Baseball informed all 30 teams in a memo on Tuesday that for the 2022 regular season the league will be allowing the use of anti-sign-stealing technology for players on the field.

The key word there is “technology.”

This new technology, called PitchCom, will now be made available for pitchers, catchers and up to three of their teammates (to help with the positioning of fielders).

PitchCom, a pad with buttons on the wrist of the gloved hand, was used in a Spring Training game by New York Yankees pitcher Luis Severino and catcher Kyle Higashioka, and they liked it.

Related: Fans Call Out Aaron Judge For Hypocritical Take On Carlos Beltran And The Astros’ Sign-Stealing

“I think it was great,” Severino said, according to ESPN. “I was a little doubtful at the beginning, but when we started using it, it was really good — with a man on second, too. I would definitely like to use it in my first start [of the regular season]. … You know what pitch you’re going to throw right away.”

College baseball has been using electronic wristbands to call pitches, with all nine players on the field wearing them this season.

“There’s no signs given from the catcher. The game moves along reasonably fast. Well, it moves faster than it has before,” said Vanderbilt coach Tim Corbin. “Just think it’s a lot easier … So the the pitcher can really deliver the ball within a 10 or 12-second time period which, shaving time off the college game is certainly I would think a good thing for everyone, especially the consumer.”

MLB pitchers and catchers will not, however, be required to use this new anti-sign-stealing technology, though most probably will.

Many Major League Baseball fans, as usual, aren’t thrilled with this latest change to the game.

Okay, so now we can focus on who is intercepting the pitchcom signal

This is just stupid - sign stealing is part of the chess match involving baseball games.

If your signs are garbage enough to be stolen WITHOUT TECH, you deserve it. Teams should be heavily fined/punished if caught with tech

The average baseball game is shorter than the average NFL game. When is @espn going to start publishing 26234 articles on how slow football is?

Mostly though, they are just having fun mocking and ripping the Houston Astros.

Related: MLB Is Moving Second Base, Fixing A Mistake That’s Been Around For 135 Years

Astros will hack this in the first week.

Astros are in shambles

Astros players are like “we’ve been doing this for years”

Sales are through the roof pic.twitter.com/WUlcsxGBpo

Shouldn’t they put the tech money into an objective strike zone?

That would be nice, wouldn’t it?