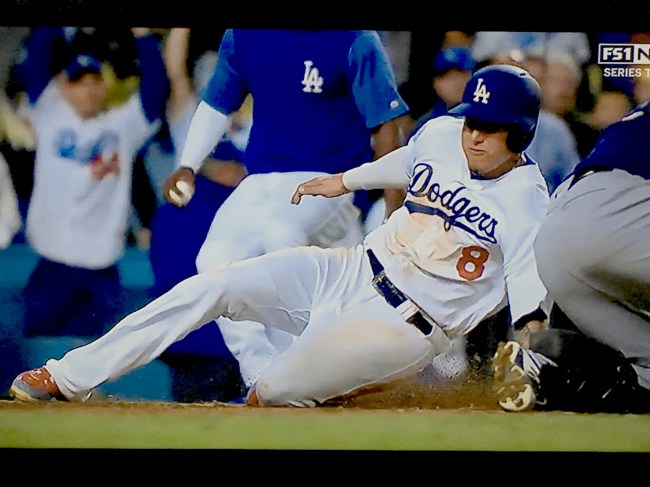 That’s what I’ve found myself saying while watching Game 4 of the NLCS between the Los Angeles Dodgers and Milwaukee Brewers — and, for anyone who missed any of it because they were too busy watching the NBA’s opening night or couldn’t stay up late, you should have serious FOMO right now. Not because its been a high-scoring affair that had a bunch of dingers, but, because, with every single pitch, the tension could be cut with a knife.

We saw 8th inning replays, a diving catch in the 10th inning by the Dodgers’ Cody Bellinger to save extra bases for Lorenzo Cain and, finally, a the winning walk-off from the aforementioned Bellinger. In a game where hits were at a premium, the L.A.’s right fielder was the one that mattered most.

The MLB playoffs is all about making a name for yourself. Where Joe Schmoes become legends. Where guys named Aaron Boone get renamed Aaron “Bleepin'” Boone. And Game 4 of the NLCS was Cody Bellinger’s turn to become an instant hero, hitting a 3-2 pitch to right field for the victory.

In a five hour-plus game, here was how it ended.

The most ironic thing about the ending of this game may have been the Dodgers player who scored the winning run, Manny Machado, who has been criticized for his lack of hustle in these playoffs. Hell, he even said that hustling wasn’t his “cup of tea” to The Athletic‘s Ken Rosenthal in an interview that aired before this very game.

Yet, there was Machado, getting to second base on a wild pitch, then rounding third and sliding in safely to beat the tag and touch home plate for the victory. Pretty funny how the baseball gods work sometimes, huh?

So, what’s this mean for the series going forward? Well, first and foremost, it’s tied at 2-2. Second, for the Dodgers, they turn to their ace, Clayton Kershaw, tomorrow night in Game 5. And, third, it guarantees baseball fans of either the Brewers one win away from the World Series of a pivotal fifth game to give one team the 3-2 edge.

October baseball is the damn best, guys, and the MLB playoffs haven’t disappointed to this point. Game 4 of the NLCS has been the latest example, and, damn it, let’s hope tomorrow night’s game can equal the drama.