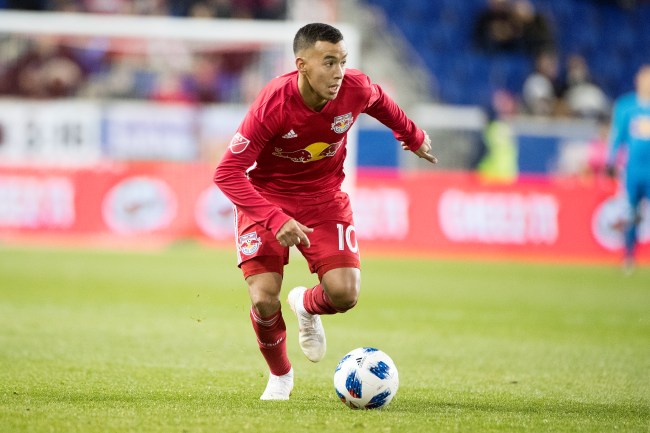 New York Red Bulls midfielder Kaku was handed a red card late in his team’s 2-2 draw at Sporting Kansas City on Sunday after kicking the ball point-blank in the stands and bloodying the face of a fan.

Coach Chris Armas said he believed Kaku was upset at an errant pass moments earlier and intended to kick the ball against the video ad board, but instead drilled a fan in the face, leaving him dazed and bloodied and in need of medical attention, a source told ESPN.

Kaku was given a red card in extra time after intentionally kicking the ball into the stands at close range and hitting a fan. pic.twitter.com/QxjmBz5fV8

Here’s a slo-mo of Kaku’s tantrum. What a child. Disgraceful. I have KC friends in those stands and now I’m embarrassed to say I’m an #rbny fan. Sorry #SKC pic.twitter.com/NwGOHrGR5F

Kaku tweeted an apology after the game, writing: “I want to take the time and apologize for my actions during tonight’s match. As a competitor, I was frustrated with myself and took out my frustrations in a way that is not acceptable. I love this game and would never want to disrespect it.”

I want to take the time and apologize for my actions during tonight’s match. As a competitor, I was frustrated with myself and took out my frustrations in a way that is not acceptable. I love this game and would never want to disrespect it. pic.twitter.com/0f1ufcXyJ4

I apologize to the @SportingKC fans, my teammates, @MLS and to all @NewYorkRedBulls supporters. pic.twitter.com/QqV6wCsrVc

It was not my intention, my heart apologies 🙏🏽♥️😞@SportingKC https://t.co/xBdEc3pPgr

The incident incited a scuffle near the sidelines, and Red Bulls goalkeeper Luis Robles and Sporting KC forward Krisztian Nemeth were both issued yellow cards.

“I know that [Kaku’s] remorseful about it. I know that he didn’t mean to do it,” Robles told the Kansas City Star. “We all checked in with the guy. I guess that’s the price you pay when you sit in the front row, right?”

Sporting KC defender Andreu Fontas gifted the fan his jersey after the game.

“It was a very, very, very hard ball that he gets in his face,” Fontas said. “I felt very bad for him because he was here to enjoy and to see a good show, a good match, and he doesn’t deserve this. I went after [the game] to give him my jersey because I felt very bad for him and [wanted to make him] feel a little bit better. I said, ‘I hope you’re OK. Thank you for the support.’

“It’s bad luck, and for sure, the other player of the other team didn’t want to hit him in his face, but it was one of the hardest things I’ve seen in a stadium.” [via ESPN]

At the time of this writing, a punishment has yet to be handed down from the MLS, but the 24-year-old Argentinian will likely be slapped with a multiple game suspension.