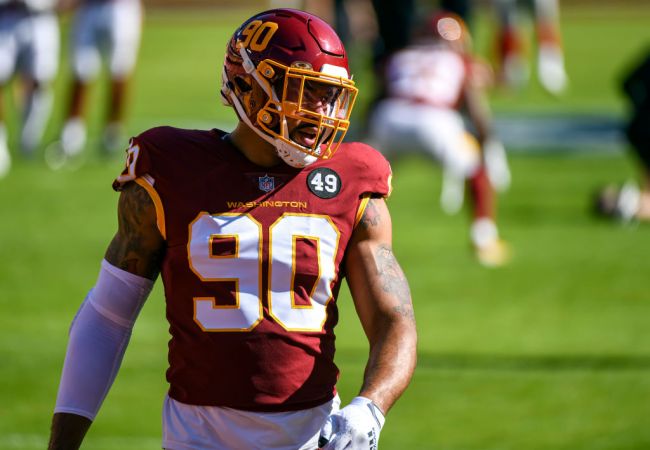 Just like the fact that not all 100% of the population is going to choose to receive the COVID-19 vaccine, not every NFL player is going to line up for the shot either. Teams are going to look to get their vaccination rate as high as possible as it undoubtedly makes life easier for franchises as protocols will continue to be put in place to hinder unvaccinated staffers and players in the league.

Take the Washington Football Team for example, which is nearing a 50% vaccination rate with OTA’s underway. Head coach Ron Rivera wants to see that number go up so he brought in a “vaccine expert” to address players that may be on the fence about receiving the vaccine.

That’s all fine and well, but odds are that if a person is already hesitant about the vaccine, an ‘expert’ isn’t going to magically change their minds, especially given the fact that the vaccine is still so new and nobody has a clue what the long-term effects could be.

Defensive end Montez Sweat, who explained that he hasn’t had COVID-19 yet, falls into that crowd as he said “I’m not a fan of it all” in regards to the expert coming to talk to players and that he “won’t get vaccinated until I get more facts.”

The fact that Sweat said that he won’t get vaccinated until he knows more about it appears to have rubbed Mike Florio of Pro Football Talk the wrong way.  Florio clearly wasn’t able to wrap his mind around a grown man making a decision about something that he doesn’t agree with or the fact that Sweat has some questions about putting something in his body.