Back in April, The Athletic released the results of a survey in which a number of NBA players were asked who they thought were the most overrated and underrated guys in the league (among other questions).

However, there was one particularly juicy query they declined to include: who’s the most hated?

SportsInsider.com decided to rectify this problem by digging through 100,000 geotagged tweets that alluded to the hatred or dislike of certain players before compiling a state-by-state map of the results. 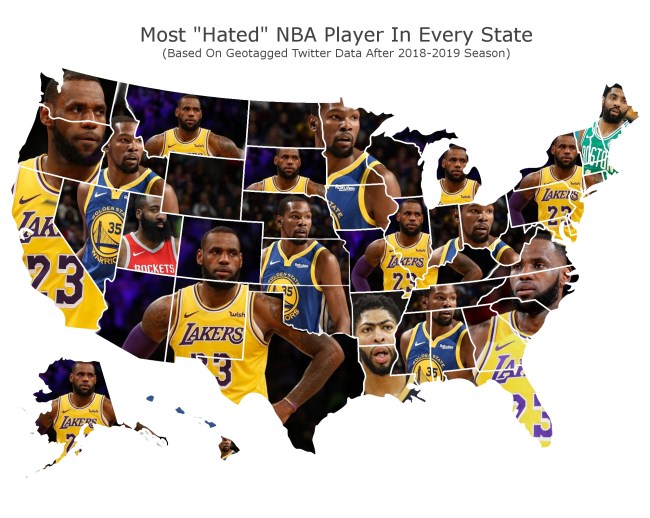 Let’s try to break this down a bit, shall we?

LeBron takes home the title by being the most hated player in 25 states—including California, which is pretty impressive when you consider, you know, he plays for the Lakers.

With that said, success breeds contempt (I’d love to see how Jordan would have measured up during his playing days) and goodwill hasn’t exactly been on James’ side ever since The Decision (please excuse the double parentheses but I’m also a bit surprised Durant topped him in Ohio).

KD secured the second place spot by garnering the most “votes” in 17 states. He’s unsurprisingly despised in Oklahoma and the surrounding states that are devoid of professional sports but I’m open to explanations for the rest of them.

Durant is followed up by Kyrie Irving, who is universally hated in New England thanks to the sour taste he left in the mouth of Celtics fans by the time the season was over. It also shouldn’t be a shocker that Anthony Davis attracted the ire of Louisiana and Arkansas after forcing a trade.

However, there’s one name on this list I’m having trouble explaining: James Harden, who managed to secure the top spot in Utah.

The most obvious explanation is that Jazz fans are just salty about losing to the Rockets in the playoffs but I also found a few articles that said Mormons hate beards so I’m going to go with that one until I’m proven otherwise.