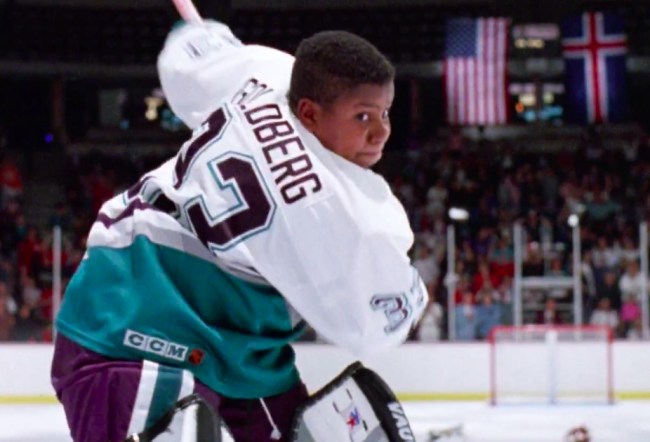 When you’re watching a movie, one of the most important things to have going on in your brain is a persistent suspension of disbelief. It’s what makes us forget about the confines of reality so that we can spend a couple of hours pretending superpowers are real, that there’s a galaxy far, far away that somehow bears an uncanny resemblance to the one we inhabit, and that someone with a super-thick Austrian accent could be named “Doug Quaid” (yes, that is the part of Total Recall I have the hardest time buying into).

However, keeping that suspension of disbelief alive can be difficult when you’re staring at an onscreen portrayal of a subject that you’re pretty well-versed in. Sports are a big example of this. When you’re intimately familiar with the rules and mechanics of a game, all it takes is one tiny oversight on the part of the filmmakers to bring everything crashing down. It’s the cinematic equivalent of a ref blowing a call, and as is the case with those moments, throwing your remote and yelling “WHAT IS THAT BULLSHIT?” before storming out of the room isn’t going to change anything.

They can be rattling, but if you don’t want to ruin an otherwise enjoyable movie like the ones below, you just have to let it go.

The Mighty Ducks films (primarily the first two) are arguably the most beloved hockey movies ever made and inarguably the most unrealistic thanks in no small part to the fact that there are a couple of plays that are inextricably tied with their success that could never actually happen.

In the second installment of the franchise, the Mighty Ducks add a new player to their roster in the form of Russ Tyler, a roller hockey player with a signature shot—the “knucklepuck”—a slapshot taken while the puck is on edge. At first glance, the physics behind the shot seem questionable at best but it’s been deployed (albeit unintentionally) on more than a few occasions in the NHL.

In the championship showdown against the hated Icelandic team (damn you, Gunnar Stahl!), the Duck’s opponents came prepared to defend against Tyler’s unstoppable shot after somehow becoming the first team to realize he takes all afternoon to dust off the puck and set things up and loudly announcing “It’s knucklepuck time!” before letting it rip.

Ever the wily one when it comes to on-ice strategy, head coach Gordon Bombay had a plan. With two minutes left in the third period, Tyler and goaltender Greg Goldberg switch equipment AND jerseys, allowing Tyler to score with an unimpeded knuckle puck.

So what’s the issue here? Well, there is a zero percent chance that the swap in question could’ve occurred without someone from Team Iceland noticing the commotion on the American bench. Additionally, there definitely has to be a rule in place that prevents players from switching nameplates and numbers. Iceland may have no one to blame but themselves for not realizing what happened in the first place but they would still have a fairly solid case if they appealed to the powers that be at the Junior Goodwill Games about what appears to be a pretty blatant violation.

Taken straight from the animal kingdom, the “Flying V” is the virtually unstoppable signature play that the Mighty Ducks heavily rely on in the first film. However, in the opinion of this humble blogger/hockey fan/amateur astronomer, it would never work anywhere other than on the silver screen.

The first problem is that they announce they’re attempting the Flying V by having the first player stop behind the net, raise their hands to the heavens, and shout “Flying V!” Between this and Tyler’s insistence on telegraphing the knucklepuck, I can’t help but think this team is somehow unfamiliar with the concept of the element of surprise. If their opposition did even a second of scouting before the game, they’d know exactly what’s coming. I mean, you can practically see it unfolding from space.

There’s also the problem of the execution itself. There are so many difficult passes made as the team migrates (pun intended) up the ice and the idea that all of them would flawlessly go tape-to-tape without anyone coughing up the puck is laughable. These kids are all like 12-years old. I spent a year as an assistant coach for a team made up of kids around this age and I can assure you that this wouldn’t happen unless it was a team comprised of those Russian super-kids.

If I was playing the Mighty Ducks, I’d have one player go directly at the formation because if you can just poke check one of the passes, you’re headed back the other way with a 5-on-0 while Gordon Bombay’s squad backchecks like their lives depend on it.

The Entire Plot Of Rookie Of The Year

Rookie of the Year is a nice little movie about Henry Rowengartner, a hapless Little Leaguer who sustains an arm injury that allows him to throw unapologetic heat and subsequently lands a contract with the Chicago Cubs. My medical training only goes up to high school health class and the handful of questions I asked the orthopedic doctor when I broke my arm in middle school, but I’m confident that this isn’t how injuries typically work.

The most believable part of this entire movie comes when he injures his arm again while on the mound with a World Series berth on the line and has to resort to an Eephus pitch to successfully seal the game. However, the 12-year-old Rowengartner shouldn’t have thrown a single pitch in the pros, as MLB rules state you can’t even try out for a minor league team until you’re 16 and have to be 18 to play in the majors.

This probably goes without saying,  but you run into a similar issue when it comes to any movie where an animal plays a sport. There may be no explicit rules barring them from competing but I think Air Bud’s high school basketball career would’ve lasted a maximum of one game before an angry coach filed a complaint.

“Yes, hello. We’d like to file a formal protest concerning the outcome of today’s game. We just feel like they shouldn’t be allowed to have a golden retriever starting at point guard. Yes, I’m a little peeved he managed to put up a dozen points on us but he also took a shit directly under the basket and now one of my guys is dealing with a torn ACL.”

It might be a stretch to call Revenge of the Nerds a “sports movie” and I admit this may be a hair nitpicky but I’ve always had a bone to pick with the javelin scene and there’s no better time to air my grievances than right now.

I am certainly in no place to question the scientific acumen of Arnold Poindexter but the javelin he engineered to accommodate the throwing form of Lamar Latrelle to help keep the Lambdas within striking distance of the campus ruling Alpha Betas doesn’t seem like it would get the job done.

I can’t figure out how this would work from an aerodynamic standpoint, which is odd considering I hold a B.A. from Florida State University (ever heard of it?). It’s also yet another example of the Achilles’ heel of making any sports moment believable: doing something that would be immediately protested by the opposition. The last time I checked, javelins don’t bend in half when they hit the ground. I know the Alpha Beta’s have some thick skulls, but really? Come on.

The Volleyball Scene From Top Gun

Why would you need to suspend disbelief for a bunch of flyboys playing a famously homoerotic game of volleyball?

Let’s overlook the fact that Tom Cruise is 5’7″ at the very most and still manages to spike the ball over a 7’11” net on multiple occasions. We’re going to operate under the assumption that nothing about the game itself is abnormal. So what is? The truly unbelievable size of the crowd that congregates around them. There’s no way that many random strangers would devote so much of their time watching a random pickup game regardless of how brilliantly the shirtless Adonises on the sand are glistening.

It may be extremely hot outside but there’s also not a single spectator who dons a parka just to ward off the copious amount of douche chills that would be radiated by such a spectacle. Being in a 4G inverted dive with a MiG-28? I can buy that. But this entire spectacle? Not a chance.