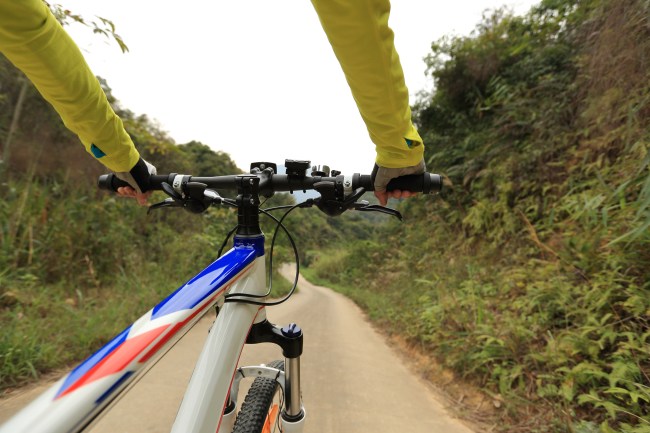 The Tour de France is back at it today after an off day on Tuesday but this action took place on Monday when well-known daredevil and infamous mountain biker Valentin Anouilh launched himself over the peloton.

That word, peloton, is most often associated with the in-home spin bikes these days but it actually refers to the nucleus group in a cycling race. Valentin Anouilh knew the Tour de France peloton was coming and his window was narrow to hit a ramp and launch himself over the race’s leading pack.

Going FULL SEND and launching over the Tour de France peloton is nothing new. Some mountain biking badass seems to attempt this every year and there’s always mixed emotions from the crowd ranging from ‘do it! It’ll be badass!’ to ‘calm TF down and don’t disturb the race’ but the racer always gets his way.

According to VeloNews.com, some of the mountain bikers who have previously gone full send and launched over the Tour de France include Dave Satson, Alexis Bosson, Romain Marandet and now 19-year-old Valentin Anouilh’s name is included with that pack. Here he is, probably confusing the total shit out of the racers…

What do you bros think, cool stunt or a shitty show of respect to people in your sport? It’s not like Mountain Biking and competitive Cycling have anything to do with each other other than the fact that they all ride bikes but they do generally have the same equipment sponsors because there are only so many high-end bike manufacturers out there.

I’m not sure I’d ever attempt this myself. It seems like there’s a lot more downside than upside. What’s the upside here? You end up on a website like BroBible with someone like me writing about you.

The downside is one of those riders catches a glimpse of you, gets distracted, clips another rider, and the peloton goes down. Then you probably get arrested on some weird French charges, right?