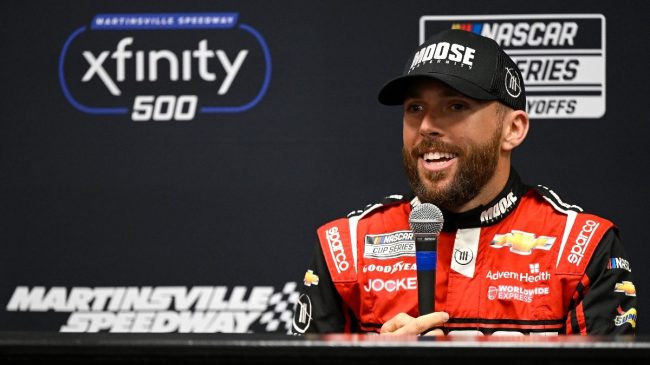 The NASCAR world was put on their heads during the Xfinity 500 Cup Series. Ross Chastain made the most bonkers move of all time, riding the wall in the final lap. It somehow worked and he was able to qualify for the championships. Now, we finally have live reactions from most of the drivers who witnessed the craziness.

It was truly a remarkable move. The wall ride looked like something out of a video game. Ross Chastain put the pedal to the metal and let it rip on the track in one of the most insane finishes in NASCAR history.

The final lap of the Xfinity 500 was so wild, that it blew the mind of all of Chastain’s fellow racers. They couldn’t help but give him props as the wall ride actually worked. Give the video a watch below. It’s definitely one of the coolest things you’ll see this month. Especially when you hear Ross Chastain and his crew’s reaction at the very end.

What a brilliant move. Maybe this is something we’ll see more often in racing. Guy made a legitimate hail marry play to qualify for the NASCAR championship and it worked. Even if you’re not a racing fan, it’s hard not to get excited watching that highlight clip. Here’s a quick clip of the play with an awesome angle because why not?

Keep an eye on Ross Chastain because this guy clearly has tricks up his sleeves.