The Racing World Is Still In Awe Of Ross Chastain’s Insane, Video Game-Esque Pass To Make The NASCAR Championship Race 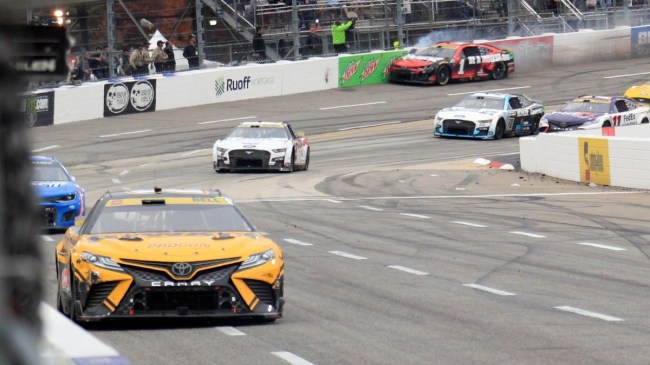 If you clicked on this article, there’s a good chance you’re probably a fan of auto racing. If you’re not, my job for the next five minutes or so of your life is to try and make you one. Because racing is cool and fun and deserves more fans.

But let’s start from the start. Ross Chastain is a 29-year-old NASCAR Cup Series driver for Pitbull’s Trackhouse Racing Team. Chastain was born and raised in Florida in a family of watermelon farmers and took an unusual path to a Cup Series ride.

After impressing in the NASCAR Xfinity Series (the equivalent of the minor leagues), Chastain got his big Cup Series break with Chip Ganassi Racing in 2021. He showed speed at times but struggled with consistency. Trackhouse then purchased Chip Ganassi Racing following the 2021 season and kept Chastain as part of its two-driver lineup.

That decision paid off in a major way this season, as Chastain picked up the first two victories of his career. Though he ruffled some feathers along the way.

But on Sunday, in tiny little Martinsville, Virginia, Chastain made himself a NASCAR legend.

Chastain was one of seven drivers competing for three remaining spots in NASCAR’s championship race next weekend in Phoenix. With just half a lap remaining, it appeared that he would fall just a couple of spots short of advancing.

I can’t stop thinking about this move from Ross Chastain to advance to the Championship 4. Just incredible. pic.twitter.com/Zji0tF3Cyd

Rather than slow down for the final turn, Chastain moved his car up against the wall and stood on the gas, using the wall as a bumper. Somehow, miraculously, the insane move worked and he passed five cars to go from two points out of the championship race to four points in.

Chastain said he learned the move while playing video games as a kid and figured he’d give it a try. Not only did it work, but his last lap time also set a new track record at the half-mile track.

"Played a lot of NASCAR 2005 on the GameCube."@RossChastain explained his video-game move. #NASCAR pic.twitter.com/4jkF6BzAgk

Drivers from across the world from various series’ couldn’t believe what they had seen. Two-time Formula 1 champion Fernando Alonso called it the best thing in racing this year.

This is the best thing of 2022 in motor racing !
We all did this on video games with damage disable. Never thought this could become reality 👏🏻👏🏻👏🏻👏🏻 https://t.co/UOsfyxox7E

Since last night, @RossChastain has gotten almost double the number of new Twitter followers that @AustinCindric got in the 48 hours after the Daytona 500, per @Zoomph.

The pass may well be a one-time thing, with NASCAR likely to legislate it out due to safety concerns. But that one move will live on in the sport’s history forever.