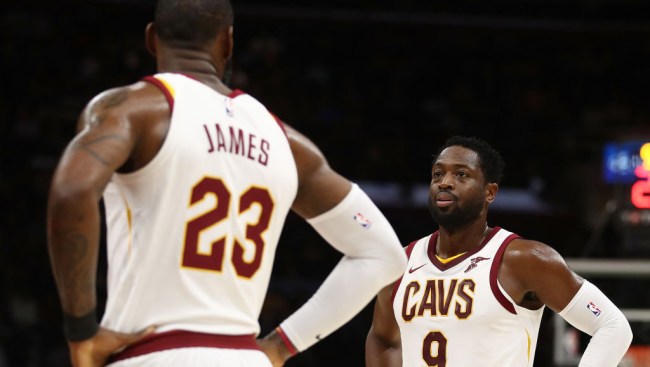 LeBron James and the Cleveland Cavaliers are sky-high right now, winning 14 of their last 15 games as well as a 13-game winning streak. However, that doesn’t stop the rumors of LeBron bolting Cleveland for another city to create a new superteam. Last week, the rumor was that LeBron was heading to the Lakers because he purchased a second mansion in Los Angeles. Now the word on the street is that James is heading to the Houston Rockets.

NBA insider Sam Amick reported that NBA executives believe that the Rockets are a legitimate threat to sign LeBron. “While James has made it clear that he won’t deliberate his uncertain future until the Cavs’ season is complete, there is strong belief in Rockets circles that they’ll have a legitimate shot at landing the four-time MVP this summer,” Amick wrote in USA Today. “Rival executives also believe the Rockets will have a real chance.”

The article notes that not only is Houston a great team already with the best record in the Association (20-4), but they wouldn’t be as much of a work-in-progress that other young teams such as the Lakers and the 76ers are. Plus the Rockets feature other stars that could help the aging superstar such as James Harden who is averaging over 32 points-per-game this season and Chris Paul, who is one of LeBron’s closest friends. LeBron wouldn’t have to shoulder so much of the workload and he would be on a team that could legitimately challenge the Golden State Warriors. It should also be noted that Texas has no income tax, a big chunk of change when you’re signing an NBA max contract.

It would appear that the Cavs are a strong enough team to dominate the East, but do they have enough firepower to compete against the Rockets, Warriors or even the Spurs? LeBron has a player option for next season and is expected to opt out and become a free agent. LeBron turns 33-years-old on Dec. 30, he can’t continue his monstrous dominance on the court for much longer. Next year may be time to find a team that has proven stars and can help him win another championship.