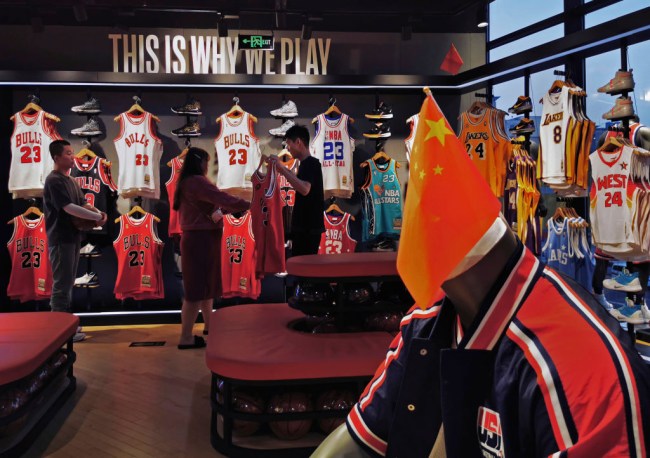 The controversy about involving the NBA, China, and Hong Kong is escalating. Two NBA fans attending a Philadelphia 76ers game were ejected because they had pro-democracy signs supporting Hong Kong protesters.

The couple had their signs confiscated, then Wachs and his wife were later booted from the game for a “Free Hong Kong” chant.

The moment Sam Wachs and his wife are escorted out of the @sixers preseason game against a Chinese basketball team for yelling “Free Hong Kong.” @6abc pic.twitter.com/3HlZxKXDzs

This exhibition basketball game was not held in communist China, this game was in the United States of America. Two Americans were kicked out of an exhibition game at the Wells Fargo Center in Philly because they were supporting pro-democracy protesters in Hong Kong.

The protests in HK are not an attack on Chinese sovereignty. The protesters' demands include: permanent withdrawal of the extradition bill, for Carrie Lam to resign, an inquiry into police brutality, for those who've been arrested to be released, and greater democratic freedoms.

Security told Wachs that “There’s no foul language, no politics.” Wachs, who was wearing a “Free Hong Kong” t-shirt, asked “why not?” and security said, “Don’t give me a hard time,” Wachs told Action News. “I think it’s shameful, harsh reaction,” said Wachs who previously lived in Hong Kong before moving to Philadelphia.

The worst part for Wachs, he was booted before Ben Simmons sank the first three-pointer of his career.

I got kicked out before the Ben Simmons three 😤

The Sixers demolished the Guangzhou Loong Lions by the score of 144-86.

The situation stems from one tweet by Houston Rockets general manager Daryl Morey that showed support for Hong Kong protesters with a graphic that said: “Fight for Freedom. Stand With Hong Kong.” China condemned Morey, and he quickly deleted the tweet.

Chinese state TV canceled the broadcast of two NBA preseason games that are being played in the authoritarian country this week.

NBA commissioner said that Morey can say what he wants, but there can be consequences to his personal opinions. “Daryl Morey, as general manager of the Houston Rockets, enjoys that right as one of our employees,” Silver said on Tuesday. “What I also tried to suggest is that I understand there are consequences from his freedom of speech, and we will have to live with those consequences.”

The state-run China Central Television (CCTV) was not sold on Silver’s apology. “We’re strongly dissatisfied and oppose Adam Silver’s claim to support Morey’s right to freedom of expression,” CCTV said in a statement. “We believe that any remarks that challenge national sovereignty and social stability are not within the scope of freedom of speech.”

Silver traveled to Shanghai on Wednesday to try to quell the situation. Chinese sponsors and partners have already cut ties with the NBA following the tweet.

China canceled a fan event on the eve of Thursday’s game between the Brooklyn Nets and Los Angeles Lakers in Shanghai because of an “inappropriate attitude” according to Reuters.

The oppressive socialist totalitarian regime has already begun to scrub the NBA from ever existing in China. NBA banners have been ripped down and Houston Rockets murals have been painted over.

NBA China Games banners now being pulled down in Shanghai. These were on the road to the Mercedes-Benz Arena and the man would not talk to @SCMP_Sport to explain what was happening. (Photos: Patrick Blennerhassett) pic.twitter.com/yCFnovTvFd

ONE Chinese worker trying to remove an NBA banner from a gigantic building has nothing to do with signage removal and everything to do with reminding Chinese to stay away from the NBA – literally.

And an unmissable visual for the rest of the world. ESPN aired this this morning. pic.twitter.com/0pGAPqPkEW

The NBA's relationship with China is evaporating. They're painting over the Rockets logo in Shanghai. 😳

The NBA has a $1.5 billion deal with Chinese streaming company Tencent, plus many of the sneakers that NBA players wear are made in China. The country has a population of 1.4 billion people and a blossoming middle class.