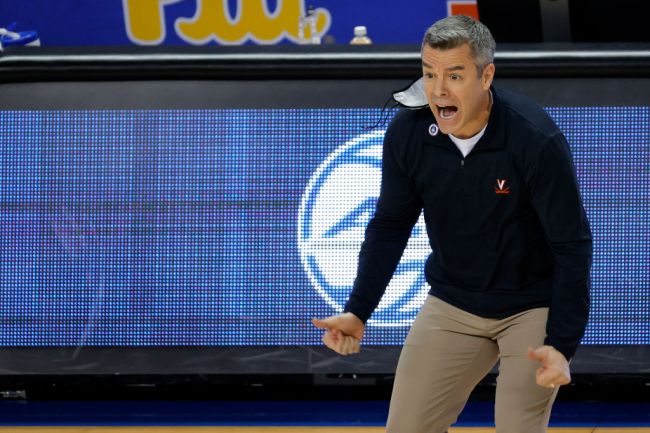 On Thursday, it was Duke that got popped with a positive COVID-19 test at the ACC Tournament ending the Blue Devils season early. Now, Virginia, the defending national champions, have been booted from the tournament due to a positive test and contact tracing within the program.

With Duke exiting the ACC Tournament, Florida State got a free pass into the semifinals, and with the Cavaliers’ exit, Georgia Tech automatically punched its ticket to the title game.

While everyone knew it was a possibility for positive tests to pop up at any given time, the fact that the bastards have started to show themselves in March, a week before the start of the NCAA Tournament, is extremely unfortunate. By no means is anyone hoping for it, but it’s impossible not to think that this could be a preview of what’s to come during March Madness.

The entirety of the NCAA Tournament will be played in Indianapolis this year, players will have their own hotel rooms, and each team will be designated their own floor in various hotels around the city. Players and staff will be subject to frequent testing and will wear contact tracing devices during both practices and games.

To help see that the tournament is completed, NCAA senior VP of basketball Dan Gavitt has even come out and said that all a team needs are five healthy players, and they’ll be able to play in games.

It sounds like the possibility of teams having to forfeit games like Duke and Virginia had to do in the ACC Tournament are relatively slim, but the flip side of that is we could see a game played between a team of five players and a full team of 12 players. While that scenario may make for entertaining TV, nobody is going to want to see that in let’s say an Elite Eight game or even the national championship game.

On top of all of this, contact tracing has been the Achilles heel of basically every sport since the pandemic hit. The chances of a team having just one player not come in contact with a teammate or staff member that tests positive would have to be close to zero.

Then you have the can of warms of a positive test coming up after a team wins a game. What happens if a team moves onto the next round and contact tracing reveals the whole team is ineligible to play? You can’t put the losing team into the next round because one, they lost, and two, they also came in contact with the team. Is the NCAA just going to give a team a free pass? Will games be pushed back giving one team extra days to rest and recover while their opponent won’t get those days?

There are a lot of what-ifs here, but It could come down to how strict, or in this case lenient, the NCAA gets with contact tracing as it seems inevitable at least one positive test is going to pop up during the tournament.

Here’s to hoping March Madness gets played without one single distraction or positive test, but contact tracing could legitimately kill it before things even get going.