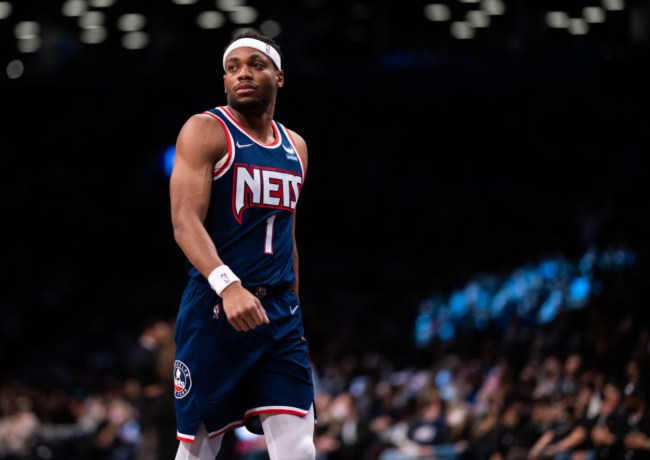 The Brooklyn Nets snapped their 11-game losing streak on Monday night with a 109-85 win over the Sacramento Kings. Not only did it mark the team’s first win in the entire month of February, but it was also the Nets’ first win without James Harden on the roster.

While Ben Simmons didn’t play for Brooklyn on Monday night, the two other players Brooklyn got in the Harden deal – Seth Curry and Andre Drummond – made their debuts in the win.

After the game, Nets forward Bruce Brown was asked the very simple question of whether or not the win over the Kings felt like a turning point for Brooklyn. Obviously anytime a team snaps a lengthy losing streak it can be perceived as a turning point, but Brown took things a bit further with his answer taking a direct shot at Harden.

“The locker room is just a great vibe in there right now,” Brown said with a smirk. “I don’t know what it is. Everything just shifted after the trade deadline. Everybody likes everybody, it’s just great.”

"The locker room is just a great vibe in there right now. I don't know what it is. Everything just shifted after the trade deadline. Everybody likes everybody, it's just great" – Bruce Brown pic.twitter.com/NbClBB9bEk

It’s hilarious that Brown said “I don’t know what it is” when talking about what has changed in the locker room since the trade deadline. We all know what it is, Bruce, it’s the fact that Harden is out of Brooklyn.

Brown had reason to be confident during his postgame presser.

Not only did he help snap Brooklyn’s losing streak, but he also had the biggest scoring night of his season dropping 19 points to go along with six assists and six rebounds.