Time Is A Flat Circle: Patriots Release Statement Apologizing For Filming Other Teams 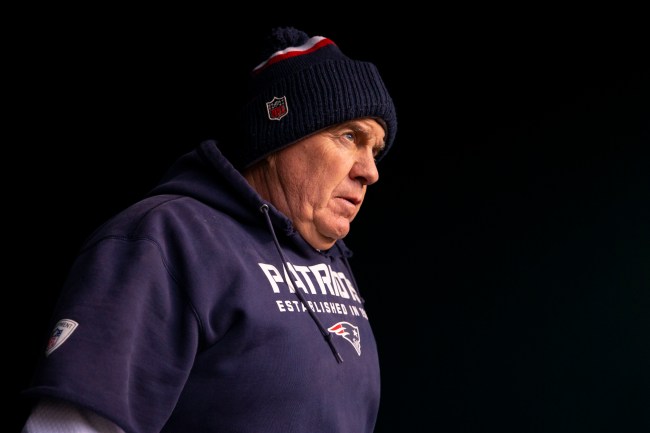 Stop us if you’ve heard this one before: the New England Patriots are in some hot water for videotaping other football teams.

On Monday, news broke that a New England Patriots camera crew was spotted with a scout they sent to Cleveland’s matchup against Cincinnati ahead of their game against the Bengals this weekend.

While the outrage from football fans was almost immediately, the controversy was squashed almost immediately, as it was reported that the person who was spotted filming the Bengals was actually being filmed for a feature the team produced called, “Do Your Job.”

According to ESPN’s Adam Schefter, the Patriots’ video crew was credentialed by the Browns to shoot video in the press box and their PR person was aware of the situation.

During the Monday Night Football game between the New York Giants and the Philadelphia Eagles, the Patriots organization released an official statement to further clear their name of any wrongdoing:

You can read the full statement below in its entirety:

“For the past year, the New England Patriots content team has produced a series of behind-the scenes features on various departments within the organization. The seven previous “Do Your Job” episodes are archived on patriots.com. On Sunday, Dec. 8, the content team sent a three-person video crew to the Bengals-Browns game at FirstEnergy Stadium in order to capture one part of a longer feature on the Patriots scouting department, in this case a Patriots pro personnel scout while he was working in the press box.

While we sought and were granted credentialed access from the Cleveland Browns for the video crew, our failure to inform the Bengals and the League was an unintended oversight. In addition to filming the scout, the production crew – without specific knowledge of League rules – inappropriately filmed the field from the press box. The sole purpose of the filming was to provide an illustration of an advance scout at work on the road. There was no intention of using the footage for any other purpose. We understand and acknowledge that our video crew, which included independent contractors who shot the video, unknowingly violated a league policy by filming the field and sideline from the press box. When questioned, the crew immediately turned over all footage to the league and cooperated fully.

The production crew is independent of our football operation. While aware that one of the scouts was being profiled for a “Do Your Job” episode, our football staff had no other involvement whatsoever in the planning, filming or creative decisions made during the production of these features.

We accept full responsibility for the actions of our production crew at the Browns-Bengals game.”

It’s a relatively difficult time in New England these days, as the Patriots have not only lost two straight games, but they had their home win streak — which began in October 2017 — snapped at 21 games.