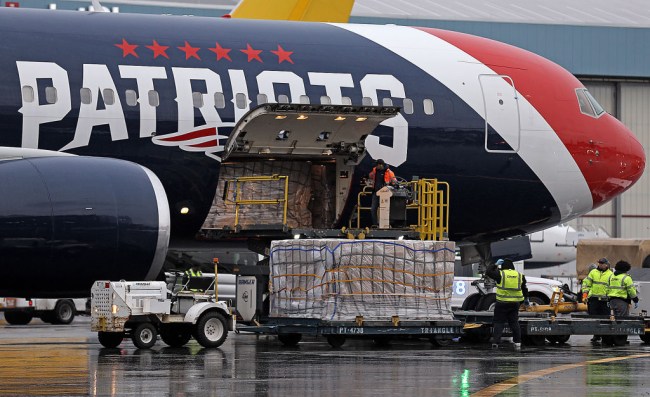 Robert Kraft and the Patriots organization stepped up in a major, major way earlier this week by using a team plane to transport more than one million N95 masks from China to Massachusetts.

It wasn’t an easy endeavor, either, given current travel restrictions all around the world. It took a lot of moving pieces to fall into place to pull off the rather intense operation. According to the report from The Wall Street Journal, there were plenty of obstacles in the way.

#HAPPENINGNOW : @RIStatePolice and @MassStatePolice are escorting 300,000 N95 masks to NY for frontline healthcare workers.
Using a trailer truck w the #Patriots logo, it dropped off about 900,000 masks in Massachusetts and 100,000 in Rhode Island. @NBC10 pic.twitter.com/Fc9YOJmttT

It all began with Massachusetts Governor Charlie Baker striking a deal for these masks with a Chinese manufacturer, but then the challenge of actually getting the masks and bringing them back to the United States became a problem.

In stepped Kraft and his son Jonathan, the team’s president, to lend over New England’s Boeing 767 passenger plane.

At this point, they had the deal in place and a Boeing 767 to fly to China, but the logistics of getting there proved to be the most difficult part of all of this. They now needed permission to land the plane in Shenzhen, China.

After the US State Department stepped in to help, actual rules were then put in place about quarantining, flight crew numbers and the amount of time they could actually have the plane on the ground in China.

To avoid having to go into quarantine for 14 days, only the necessary flight crew was allowed on board, and they had to stay on the plane while the plane was grounded in Shenzhen, according to Business Insider.

According to Beaton, the crew also had to get visas, which meant rushing the photos and application, keeping the Chinese consulate open over the weekend in New York City, then having the visas flown back to Ohio, where the plane was getting its avionics upgraded for the trip.

The masks also had to be counted, inspected and rushed through customs, and once the plane was on the ground, they needed a crew to transfer the masks.

The plane only had a three-hour window to get in and out of the airport and they were able to pull off the operation in 2 hours and 57 minutes.

According to the report, the order was set to be for 1.7 million masks, but they could only fit 1.2 million on the plane. The rest are expected to be shipped at a later date.

That, my friends, is called getting the job done.