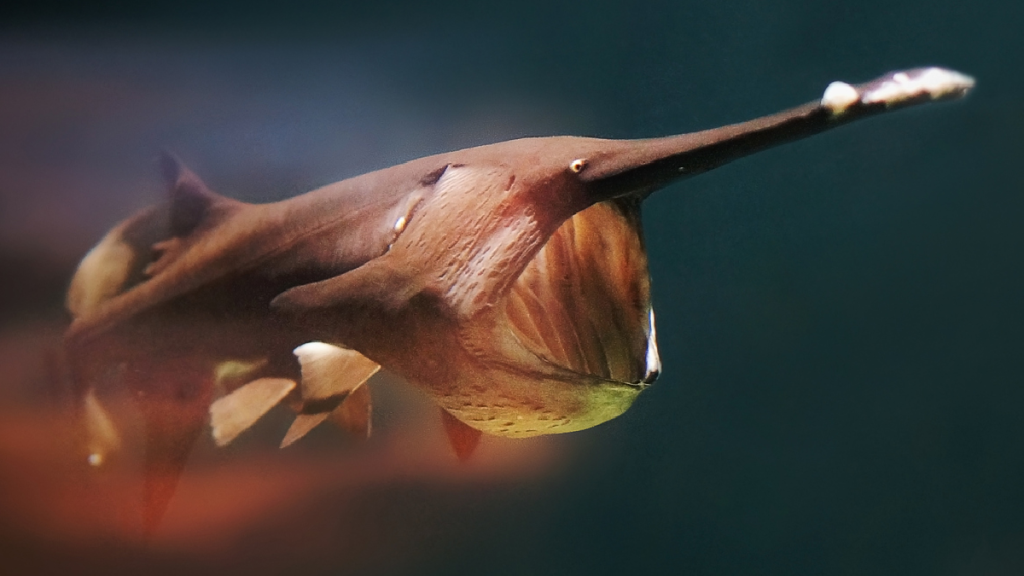 Paddlefish are amongst the most peculiar fish on planet earth. With their stout and rotund bodies, short shark-like fins, and elongated rostrum (big ol’ nose) they look like a fish that was created with leftover parts from other species.

Paddlefish are often referred to as ‘primitive fish’ and their existence dates back over 300 million years. The American Paddlefish (different from the Chinese paddlefish) have always been a popular sport fish due to their peculiar looks but they’re tricky to catch because they are ‘filter feeders’.

This basically means they’re out there swimming around lakes with their gargantuan mouths wide open waiting for small fish, insects, larvae, and zooplankton to swim in their mouths.

What this means for fisherman is these fish are very difficult to catch because they don’t attack lures or bait, so anglers basically need to ‘snag’ them with a hook. And what it means for spearfishing is it’s a popular target species because these fish aren’t often caught with a hook, rod, and reel.

Chris Cantrell of Berryville, Arkansas was spearfishing on Beaver Lake when he saw a small submarine moving towards him. Instead of panicking, he pursued the fish and soon shot what will eventually be a new spearfishng world record for paddlefish after all the requisite the paperwork is submitted and approved.

90-Pound Arkansas Paddlefish Will Be A New Spearfishing World Record

The Arkansas Game and Fish Commission announced this new spearfishing world record in a recent Facebook post along with details about the catch:

Feast your eyes on this absolute unit of a paddlefish, and a new spearfishing world record once the paperwork clears:

A post shared by Arkansas Game and Fish Commission (@arkansasgameandfish)

Details on this new world record paddlefish shot in Arkansas by Chris Cantrell.

When he was packing up his spearfishing gear for Beaver Lake, Chris Cantrell likely had no clue that he’d soon be face to face with world-record paddlefish. But every angler always hopes for that exact scenario. It’s the ‘one more cast’ syndrome where every fisherman is always just one more cast away from catching the best fish of their lives.

“It was a trip to remember. I was on my third and final dive of the day when I saw it. I dropped the gun after the shot because the fish made a strong dive when it was hit, With a big fish, you drop the gun so that it doesn’t pull you down.

The float line will keep it pinned. By the time I was back at the surface, the fish had already pulled the line from the gun and the 50 feet of float line. It was pulling against the float at the surface. It probably took 10 to 15 minutes.

I had to let the float line work about four or five times during the fight when the fish made hard runs. It was a holiday weekend, so finding somewhere with certified scales that was open took a long time. The AGFC office was closed, and certified scales are required for any record submissions. My sister actually suggested we try calling a UPS store. To my surprise, one agreed.”

So they caguth the fish, now what?

Ensuring this paddlefish is a new spearfishing world record.

This record-setting 140-pound Paddlefish looks like someone made a fish out of spare parts https://t.co/SDJEcpvnHa

They took the fish to a nearby UPS Store, a suggestion from Cantrell’s sister, and the UPS store had a certified scale. This is a handy tip for any anglers out there who ever catch a fish big enough to potentially be fishing world record.

There’s no guarantee any UPS store will actually agree to let you weigh a fish on their certified scale because they’ll then have to clean off the slimy fish residue but it’s always worth a call. Now that they had a certified weight of 90 pounds and 12 ounces.

Interestingly, this isn’t the largest paddlefish ever caught in Beaver Lake. The Arkansas State Record for paddlefish is a 118 pound, 9 ounce fish that was caught on rod and reel (by snagging the fish) back in 2020. And sonar images of Beaver Lake have shown there are even bigger paddlefish down there somewhere waiting to be caught one day.

Cantrell told the Arkansas Game and Fish Commission that prior to shooting this new spearfishing world record paddlefish, the largest fish he’d ever caught was a 22-pound striped bass. He now plans to go back to Beaver Lake every weekend until it’s too cold and keep searching for bigger paddlefish.