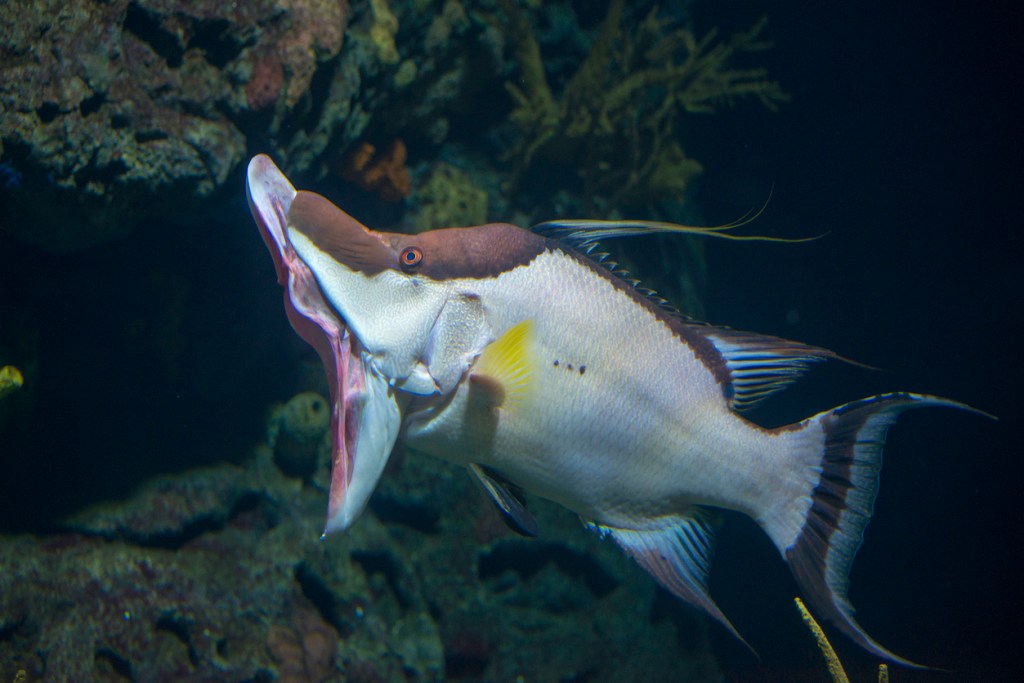 The Hogfish Snapper carries its peculiar name because of its unique pig-like snout. They typically weigh between just 1 to 4 pounds and anything over that size is considered a good fish.

If you eat fish, Hogfish Snapper is one of the most delicious fish on the planet. It was ranked #2 on my list of The 25 Best Tasting Fish in the World and I’d keep the species in that slot if I were to re-write that article today.

James Michaelin is a diver and speargun fisherman from Southwest Florida. Actually, he appears to be located less than 30 minutes away from where I live. And he’s now the proud owner of a new Florida fishing record. The IGFA fishing world records are only for fish caught using rod-and-reel, not spearfishing. Florida records do allow for spearfishing.

It’s worth noting that Hogfish Snapper are rarely caught using hook and line because they have such funky mouths. Fishermen have much better luck at landing this species when using a speargun.

The current IGFA fishing world record for Hogfish is 21 pounds, 15 ounces. That fish was caught by angler Wesley Adair Covington in Georgetown Hole, Charleston, South Carolina on September 11, 2011. The Hogfish that James shot weighed 21 pounds, 7 ounces once they got it to the scale but this was AFTER the fish was gutted and placed on ice in the cooler so they could keep spearfishing.

First, let’s take a look at this absolute beast of a fish. The mouth on this Hogfish Snapper is wide enough to swallow a bulldog. James also uploaded YouTube footage (below) of shooting this would-be world record Hogfish. Check it out:

Michaelin and friends were spearfishing about 100 miles offshore at the Middle Grounds. They were making dives to a reef in about 120-feet of water. He spoke with the Bradenton Herald about what led up to this miraculous catch.

“Getting close to the end of the second dive I said there’s no way I’m coming up without something to shoot. I had 1000 PSI left and started swimming away from the big structure to some smaller stuff. Right when I started to call it I saw a big hog come to the left of me.”

He spotted the huge fish and estimated that it was “about 18 pounds” which seems oddly specific. The fish came close to him and was intrigued by the speargun and that’s when he was able to take the easiest shot of his spearfishing career. James hit it right behind the eyes and brought the fish back to the boat.

That’s when they gutted the fish and put it on ice to keep it fresh. This way they could keep spearfishing for more fish to keep. The crew also landed another giant Hogfish at 16 pounds.

At 100+ miles offshore you have zero cellphone service. There’s no ability to look up fishing world records. But on the ride back to the dock he really started wondering how much that fish weighed. Once they got to the dock and pulled a scale they were blown away. They assumed their scale was broken.

So they took the fish to Don’s Dock on John’s Pass which has a certified scale and the pending Florida state record Hogfish weighed 21.7 pounds. Again, this is after they removed the guts from the fish and put it on ice (where some blood presumably drained). So this fish would’ve theoretically weighed AT LEAST several pounds more had they kept it intact.

Because he shot this fish using a speargun, it was never eligible to be an IGFA fishing world record because those are only rod and reel. But this fish easily weighed more than the existing world record Hogfish Snapper that weighed 21 pounds, 15 ounces before they gutted it.

Florida fishing records for Hogfish do allow for speargun captures. They’ve submitted all of the necessary paperwork and it’s now just a waiting game but this is a new state record for sure. He is also going to have the fish taxidermied and mount it on the wall, as one should absolutely do if one ever catches a fish like this.

If you enjoyed this and want to read about more recent fishing world records, check out this 51-pound world record Snook caught in Cabo that broke a 20-year-old record. Or you can read up about this former NHL goalie who caught the largest sturgeon in modern history.