It’s Absurd That The New York Jets Have Basically Paid C.J. Mosley $2.2 Million Per Tackle Since Signing Him In 2019 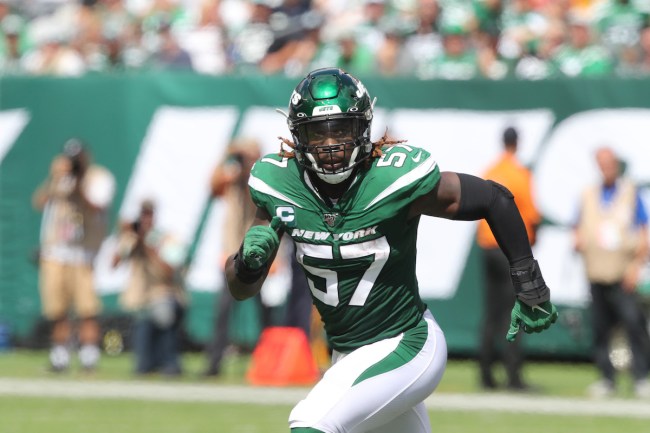 With NFL free agency beginning today, the New York Jets are one of the teams who (presumably) will be spending big money to improve its roster. After all, the AFC East team won just two games last season, just hired a first-time head coach (Robert Saleh), may or may not be trying to trade quarterback Sam Darnold this NFL offseason, and need to figure out what to do with the No. 2 overall pick in the NFL Draft. To say it’s an important few months for Gang Green is an understatement.

But before splurging on free agency by attacking it aggressively to try and get better players, the Jets need to remember the name C.J. Mosley, who the team added during the offseason in 2019.

A four-time Pro Bowler while with the Ravens, Mosley agreed to a massive five-year, $85 million deal with the Jets just two years ago. Unfortunately, the return on investment hasn’t been great, as the franchise has pretty much wasted millions on the linebacker, paying him more than $20 million in bonuses already, while getting just two games and nine tackles in two seasons. No, seriously

[In 2019] He played two games and made nine tackles. Last year he opted out. In the nearly 730 days since joining the Jets, owner Woody Johnson has paid Mosley over $20 million in bonuses. That averages out to about $2.2 million per tackle.

So is this meant to crap all over the New York Jets? Well, not exactly. It’s just a reminder for football fans to tame expectations during the NFL offseason and, more specifically, during free agency, where big names become available for a reason. J.J. Watt is a future Hall of Famer, but is he really worth the $23 million in guaranteed money right now that the Arizona Cardinals gave him? Probably not. Other former Pro Bowlers and big names will command a similar salary — so buyer beware.

In an NFL offseason that’s already proven to be crazier than others, free agency is bound to produce some “wow” moments, with plenty of players getting enormous amounts of money. But teams need to remember this C.J. Mosley signing with the Jets as a warning sign that things can go bad in a hurry — and end up costing an organization millions.