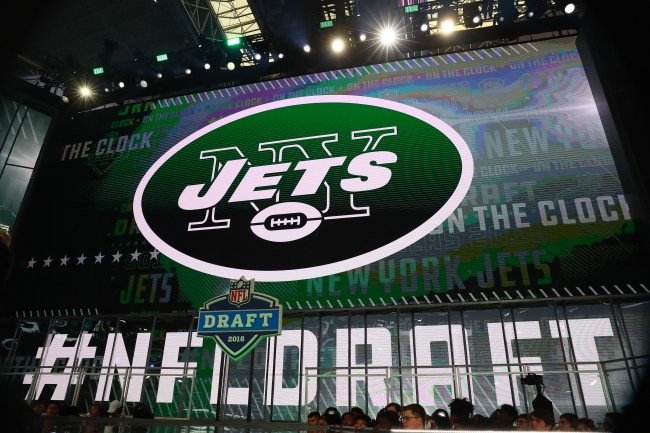 The New York Jets have been a laughingstock for, oh, the past decade, which, ironically, was the last time the AFC East team reached the playoffs. Yet, every single year — like most NFL fans — the franchise’s biggest supporters hope that the NFL Draft can be the savior of the franchise, bringing them a superstar that will lead them to division titles and Super Bowl appearances for 10-15 years.

Although that hope hasn’t been fulfilled yet, you can’t blame New York Jets’ fans for at least trying to keep the optimism, right? After all, that’s what the NFL Draft is supposed to be about — enthusiasm and a belief that, yeah, this will be the year.

Whether that’s the case with the team’s first-round pick this year  — Louisville tackle Mekhi Becton — is left to be seen. But one thing that did get a reaction from fans (and not a very good one) is a tweet from a New York radio station, WFAN660, about the team’s soon-to-be announced selection. Take a look below at the questionable design.

The @nyjets select OT Mekhi Becton with the #11 Pick in the 2020 #NFLDraft pic.twitter.com/HsHvkMl0Vq

Notice anything, uh, weird about that image? Maybe, like, I don’t know, a little sexual innuendo hidden in it — that may be caused by some sexual frustration during this quarantine from the graphic designer who made it. Your eyes aren’t playing a trick on you, because, like me — and tons of other New York Jets fans — it sure looks like it reads “The Dick Is In.”

Rest assured, once social media saw the NSFW graphic pop up on Twitter, they didn’t keep their reactions bottled up. Just take a look at some of the zingers people had to say in response.

Graphic design guy knew what he was doing

That’s what he said. Respect your fonts, @nyjets

I see they re-signed Favre

In all fairness to the graphic design person here, people make mistakes. Plus, it’s been a long two months in isolation and we’re all pretty frustrated and/or distracted while working from home, so maybe he/she just had something on their mind and didn’t pay close enough attention to the font. Yeah, I’m just going to tell myself that’s the reason for the error here — and not just assume it’s another sign of bad things to come for the New York Jets.