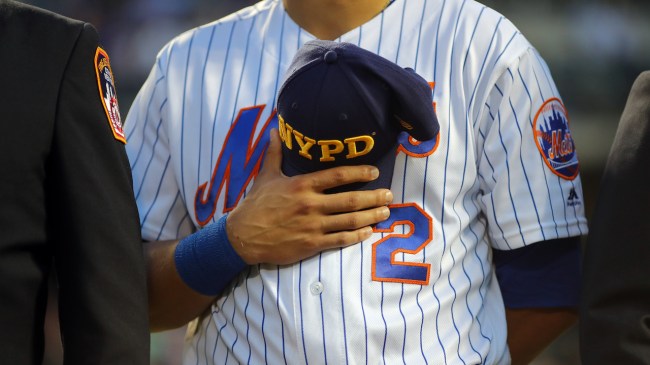 Apparently unhappy with the NFL taking the title of the professional sports league with the most nonsensical and borderline offensive decision making, Major League Baseball threw their *hat* back into the ring of out-of-touch choices this week.

More so than any other professional American sports franchise, the New York Mets are intrinsically tied to 9/11 forever, as they were the first professional team to play a game in New York City following the attacks.

As they do every year, the Mets did an excellent job of honoring the 9/11 first responders, as first baseman Pete Alonso ordered custom 9/11 cleats for all of his teammates to wear during the game.

However, it was without any help from MLB, as the Mets slugger, who originally wanted the team to don hats featuring the FDNY and NYPD, revealed that the league office shut that idea down — something they also infamously did for the 10-year anniversary back in 2011.

“I think it’s kind of sad… I mean, since that first game back (in 2001), they kind of shut it down every single year since. I think that’s really unfortunate. So a way to kind of get around that was the cleats,” Alonso told reporters after the Mets shutout win over the Diamondbacks, scoring nine runs on 11 hits.

Alonso wasn’t the only one frustrated with MLB’s head-scratching decision, as Mets radio announcer Howie Rose also tore into the league, aptly pointing out that they have no issue forcing the “horrendous” Player’s Weekend uniforms on us or allowing the Houston Astros to wear Apollo 11 hats to commemorate the moon landing.

Mets radio announcer Howie Rose absolutely eviscerates Major League Baseball for not allowing the Mets to wear First Responders hats on 9/11. He comes with the receipts, too! pic.twitter.com/3jpiJjEt1c

While the Mets wore First Responder hats during the pregame ceremony, they ultimately took them off for the game, instead opting to wear the custom cleats, which Alonso smartly did not seek approval for.

“I feel like if Major League Baseball kind of got their hands on it, it may not have been approved. But I’m really happy that we kind of banded together here in the clubhouse and made something cool happen,” Alonso said.

Major League Baseball has made one decent decision regarding this issue, as they will not be fining the Mets for wearing the custom cleats.

Mets fans, if you couldn’t already tell by his on-field play, the Major League leader in home runs is a legend in the making.