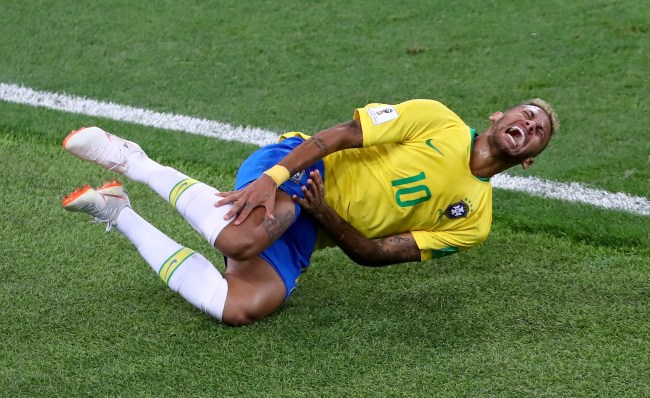 Like all of the Brazilian greats, Neymar da Silva Santos Júnior goes by one name. He’s known worldwide simply as Neymar, and he’s one of the greatest goal scorers on the planet. He has 269 club goals in his career and 57 international goals. The PSG striker helped Brazil to the quarterfinals in the 2018 FIFA World Cup where the team lost to Belgium 2-1.

Before, during, and after the 2018 FIFA World Cup so much has been made about Neymar rolling around on the ground and allegedly faking injuries. Someone calculated how much time Neymar had spent flopping around prior to the Belgium game and it was 14 minutes. The internet roasted the absolute shit out of Neymar for his over-the-top flop against Mexico in the Round of 16.

Even though Neymar has left the World Cup the criticism hasn’t stopped. A Swiss youth soccer team went viral for practicing a ‘team flopping drill‘, and now the #NeymarChallenge is taking off. At a Mexican league soccer game over the weekend, Club Tijuana invited fans onto the field during halftime to compete in the Neymar Challenge where they rolled and flopped their way across the field:

Someone has far too much time on their hands #Neymar #NeymarChallenge #WorldCup #rolling pic.twitter.com/XwEEIy1fnb

The #NeymarChallenge memes/tweets keep going on and on. You can check them out on Twitter HERE if you want to keep browsing.