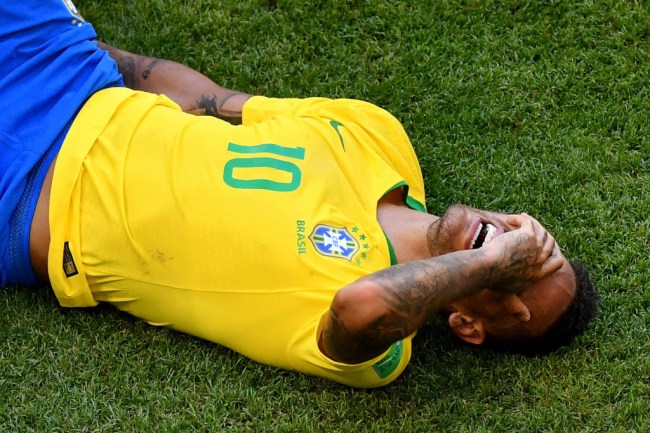 After Uruguay’s loss to France on Friday morning, Luis Suarez joined Cristiano Ronaldo and Lionel Messi (among others) on the list of the best players to be eliminated from the 2018 World Cup so far. As it currently stands, the most talented player remaining in the tournament is Brazil’s Neymar, whose achievements so far have been largely overshadowed by his incredible ability to flop harder than The Adventures of Pluto Nash did at the box office.

If you’ve been paying attention to this year’s World Cup, then you know Neymar has gained a reputation for collapsing to the ground any time a defender breathes a little too hard in his vicinity before rolling repeatedly over like an SUV that got PIT maneuvered during a chase on Cops. It’s reached a point where coaches are teaching kids to follow in his footsteps because it’s never too early to perfect the art of flopping.

There’s no doubt that Neymar has been at the receiving end of some legitimate fouls over the course of this year’s World Cup (he was fouled ten times during a game against Switzerland) but it’s hard to be that sympathetic based on his tendency to overreact to the slightest touch. He’s has spent a ton of time writhing in what may or may not have been actual pain over the past few weeks but I never would have been able to guess just how much times he’s wasted laying on the pitch.

According to CBS Sports, a Swiss television station has determined Neymar has spent a total of 14 minutes so far working up the nerve to stand back up.

This is amazing: A Swiss TV station has tracked Neymar's total time on the ground during the World Cup. It's 14 minutes.

Neymar might not be in the running for the Golden Boot but at least he’ll be able to take home the distinguished honor of being the best time waster in the world.