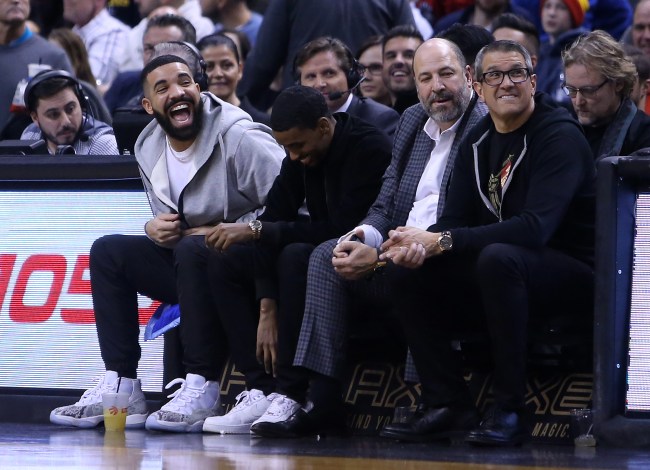 Tonight’s NFL Draft brings hope to every single NFL franchise. It’s the day where a first-round selection could, ultimately, be a bust, and a sixth-rounder could end up winning six Super Bowls and becoming the GOAT; as Tom Brady did. While the entire thing is a crapshoot, even with all the scouting that goes on leading up to it, no one knows for sure which players will end up being stars or busts.

But the Carolina Panthers are at least trying to do anything to curse the other 31 NFL teams when they make their selections throughout the NFL Draft, because the team used an image of Drake wearing every team’s logo except their own in a hilarious Instagram post. Take a look at the well-played troll job from the Panthers below.

With the caption simply saying, “Worth a shot,” every single team with a pick in this year’s NFL Draft is officially on notice that something bad could happen. If that’s the case, blame the Carolina Panthers for it, because they may have just found the secret recipe to jinxing their competition.

Obviously, the “Drake Curse” is a real thing. Have you seen how the rapper has singlehandedly caused heartache to sports fans by wearing gear of a number of different teams? From Kentucky basketball to Alabama football to his own Toronto Raptors, Drake may not think that he’s bad luck, but, c’mon, is there a sports fan out there who feels confident with the guy wearing their team colors before a big game? I doubt it.

Hell, Drake himself even knows that he’s bad luck, as evidenced by him joking about the Drake Curse following the Toronto Raptors’ first-round win in the NBA Playoffs. While the Raps won the series, Drake’s hometown Toronto Maple Leafs lost in devastating fashion in Game 7 of the NHL Playoffs later that night. Talk about bad karma with this dude after saying this to reporters.

Drake to the media on his way out of the building. "You want me to talk about the curse or you guys good?"

That’s pretty good stuff, but not as good as the Carolina Panthers legit making every team with a pick in the NFL Draft losing sleep over a curse that might just happen. You may not believe in superstitions, but, when it comes to the Drake Curse, you definitely should.